Even as femicide rates rise, conservatives in the ruling party want to roll back legislation designed to protect women. 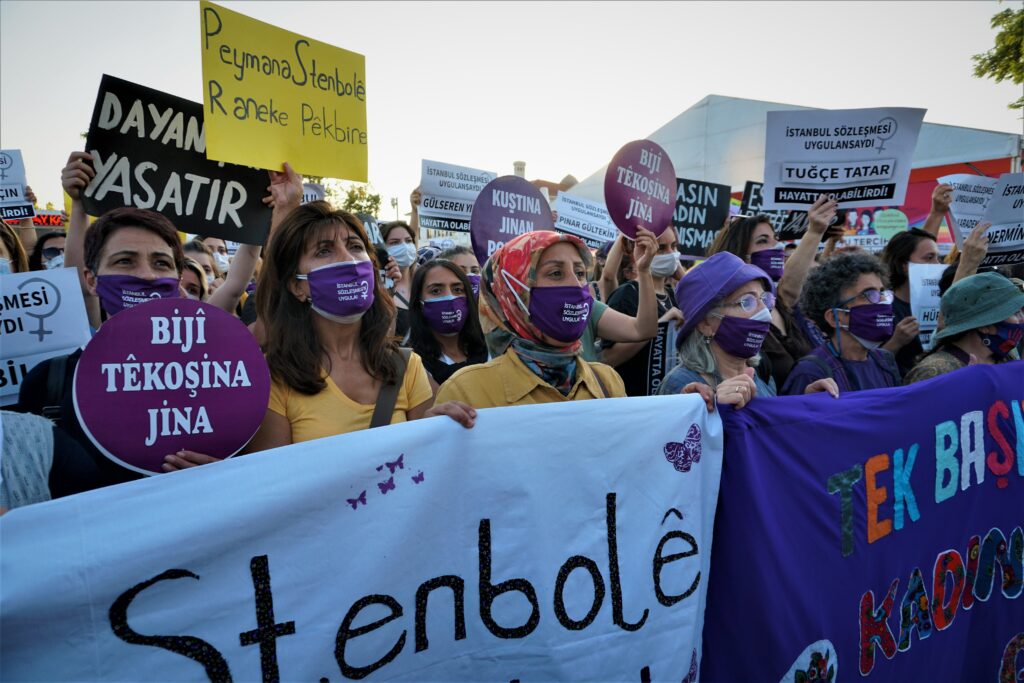 Credit: Nimet KıraçWomen from diverse backgrounds demonstrating for their rights in Istanbul on August 2, 2020.

For the last five years Turkish feminist movements have faced one backlash after another and are perpetually braced for the next one. “There is always this… feeling of insecurity, uncertainty, and inability to see the future,” activist Feride Eralp told The Conversationalist. “Your most basic rights are constantly under threat.”

Eralp has been advocating for women’s rights since she was 15; her mother was active in the founding women’s movements in the 1980’s. In recent weeks, thousands of women have been demonstrating on the streets of Istanbul, Ankara, and 35 additional cities across Turkey to demand their civil rights and to protest a shocking rise in rates of femicide.

The catalyst for this latest round of protests occurred in July, when police found the mutilated corpse of Pınar Gültekin, a 27 year-old student, in a rural area of southwestern Turkey. They arrested her ex-boyfriend, Cemal Metin Avci, who confessed to having beaten and strangled Gültekin, before burning her body and stuffing it into a barrel, which he buried in the woods. The horrific incident was heavily covered by Turkish media, eliciting widespread revulsion; the murder became a rallying cry for feminist groups, which had already been protesting for months the failure of government authorities to protect women from domestic violence and femicide.

The government’s obligation to protect women is enshrined in the Istanbul Convention, a groundbreaking human rights treaty against domestic violence that is aimed at preventing violence against women. It is formally called the Council of Europe Convention on preventing and combating violence against women and domestic violence. Turkey was the first country to ratify the treaty, signed on March 12, 2012. Since then, 45 countries and the EU have signed. No country has ever withdrawn from it.

Recently, President Erdoğan’s Justice and Development Party (AKP) suggested they would withdraw Turkey from the treaty.

The impetus for the Istanbul Convention was the 2009 decision of the European Court of Human Rights (ECHR) in Opuz v Turkey, which found that Turkish authorities failed to protect Nahide Opuz from her violently abusive ex-husband, even after he stabbed her repeatedly and murdered her mother.

So far this year, 285 women have been murdered in Turkey. That’s more than one woman murdered per day, the majority at the hands of their estranged spouses.

Despite these numbers, lobbying groups for political Islamists, composed mostly of conservative men, have been pressuring the government to withdraw from the Convention on the basis that it undermines ‘family structure.’ In fact, the Istanbul Convention truly aims to protect the most vulnerable members of the family from domestic violence.

Preservation of the traditional family structure has long been a foundation of values instilled by the Turkish ruling party, explained Sinem Adar, an Associate at the Center for Applied Turkey Studies in the German Institute for International and Security Affairs. “I think the current government definitely has a very particular, rigid understanding of the family,” Adar told The Conversationalist.

Erdoğan has said numerous times throughout the years that women should have at least three children. The President has also referred to women who do not wish to have children as “unnatural” and “incomplete.” The deputy chair of AKP, Numan Kurtulmus, once described single women as “hedonistic,” and asserted that they put “dynamite in the foundations of the family.”

When Erdoğan, who was then prime minister rather than president, made his 2013 statement about woman having to bear three children, he played into this capitalistic driver of women’s oppression. As Eralp said, the family becomes a unit to keep women producing labor, inside and outside the home. Turkey does not have a strong social welfare system and it is on the brink of a financial crisis; under these circumstances, women become primary caregivers for children and the elderly. “With an economic crisis of this degree, you don’t want to lose free labor,” Eralp explained. As Erdoğan said in his speech: “One or two children mean bankruptcy. Three children mean we are not improving but not receding either. So, I repeat, at least three children are necessary in each family, because our population risks aging.”

Turkish society invests the family with tremendous value and importance; the average Turkish citizen is inculcated from childhood with a strong sense of responsibility for relatives. But when the issue of gender is contextualized within the family, individual rights are undermined. “It’s almost like not seeing the woman as an individual but seeing them as part of a family,” Adar said. In other words, a woman’s safety, security and freedoms cannot be seen as intrinsic, but instead debatable within traditional family structures.

The government’s rhetoric and policy can be seen as systematic pressure to suppress individual liberties when it comes to family, sex, gender relations; they leave very little space for women to seek change. “It’s like making the voice of the women who need the help the most, less and less heard, because again everyone is packaged in the context of the family,” Adar said. “If they decide to abolish [the Istanbul Convention], it would definitely have an influence on individual liberties.”

Canan Güllüm, the president of the Federation of Women’s Associations in Turkey, said during a phone interview that the Islamist lobbying groups have long advocated for the “protection of the holy family.” She agreed that this contributed to a culture that threatened women’s safety and freedom. “Family, where the violence is reproduced as it is happening now in the society, is not a safe place for women,” Güllü said.

The composition of the protests belies conservative claims that Turkish feminists are primarily secular. Practicing Muslim women wearing the traditional headscarf are as visible at demonstrations as their secular sisters; they are all willing to hold picket signs reading “We don’t want to die!”; the phrase recalls the last words of Emine Bulut, whose husband stabbed her to death last year in a café—in front of her 10-year-old daughter. Women who represent a broad swathe of political and religious views have come together in these protests to advocate for their right to life. As Güllü pointed out, they “do not feel comfortable in today’s patriarchal and unequal family structure where their rights are not protected.”

Whether they are religious or secular, there is only one set of laws, and one path of recourse for all people in the country. “Women are aware of these rights and they’re not willing to give them up for any ideological or political reasons,” Eralp said. “I can’t imagine a woman who would push that away under her own free will.”

The debate around the Istanbul Convention in Turkey has also divided the ruling AKP’s base. Erdoğan’s own daughter, Sümeyye Erdoğan Bayraktar has come out in support of the Convention. Bayraktar is the deputy chair of the Women and Democracy Association (KADEM), which is conservative on issues such as LGBT rights; it advocates for ‘woman’s human dignity’ and is often engaged in lobbying the government.

There is something religiously conservative in the family value model the government is trying to “preserve,” but it isn’t predicated on a secular vs religious binary. A more accurate analysis would emphasize the ongoing inequality between men and women, and how the impunity and lack of justice demonstrated in Turkey promotes it. In recent years, a more moralistic, conservative discourse has become salient in the public realm. At the same time, there has been an increasing intensity of violence by the state and break down of the justice system in order to consolidate power.  As Adar put it; “it has to do with the institutional deterioration [and] the deterioration of the primary rule of law.” To a certain extent, the increase in violence now prominent in the public eye, reflects the socio economic situation of the country.

The rate of femicide has more than doubled in Turkey since the signing of the Istanbul Convention, which means that its legal and protective measures are not being implemented. Rarely is there justice for women who are murdered or abused, particularly if the perpetrators are well connected. For Turkish women, their rights, as Eralp observed, are transactional.

Güllü added that while the framework to protect women and promote equality is already in place, it hasn’t been prioritized. The government, she believes, has not upheld the values of civil and gender equality in the last 20 years.

The rhetoric employed by Erdogan’s conservative government further conveys to the public an implicit understanding that this type of discourse and behavior is acceptable; this acts as a legitimizing power. In general, there is an acceptance and understanding of men’s motives to commit violence towards women, which ends up being passed from one generation to the next. Amnesty International went so far as to say in an August statement on the rise of femicides that “even the discussion of a possible withdrawal [from the Convention] is having a huge adverse impact on the safety of women and girls.”

At the same time, women in Turkey are clearly going through a period of consciousness raising and are becoming much more politically assertive. But unless the value of gender equality is internalized throughout all levels of government and civil society, the task of protecting individual rights in Turkey will continue to be challenging. What’s needed is a widespread understanding that no one “deserves” to be subjected to violence.

Turkey’s feminist activists are hopeful, given the increasing numbers of women coming out to protest and stand up for their rights. “The women’s movement in Turkey is very strong and consolidated, and we will not give up fighting,” Güllü said, emphatically.

The shocking murder of Pınar Gültekin, a 27 year-old student, at the hands of her married ex-boyfriend, proved a galvanizing force. 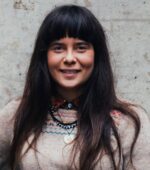 Tessa Fox is a freelance journalist, photographer and filmmaker who focuses on war & conflict, humanitarian affairs, and human rights in the Middle East. Originally from Australia, Tessa is currently based in Istanbul, where she reports on Turkey, Syria and Iraq. Her work has been published by Foreign Policy, The Guardian, BBC and Al Jazeera. Follow her on Twitter @Tessa_Fox.

Tessa Fox is a freelance journalist, photographer and filmmaker who focuses on war & conflict, humanitarian affairs, and human rights in the Middle East. Originally from Australia, Tessa is currently based in Istanbul, where she reports on Turkey, Syria and Iraq. Her work has been published by Foreign Policy, The Guardian, BBC and Al Jazeera. Follow her on Twitter @Tessa_Fox.