The devastating legacy of the Bosnian War is laid bare in this dramatization of the Srebrenica massacre. 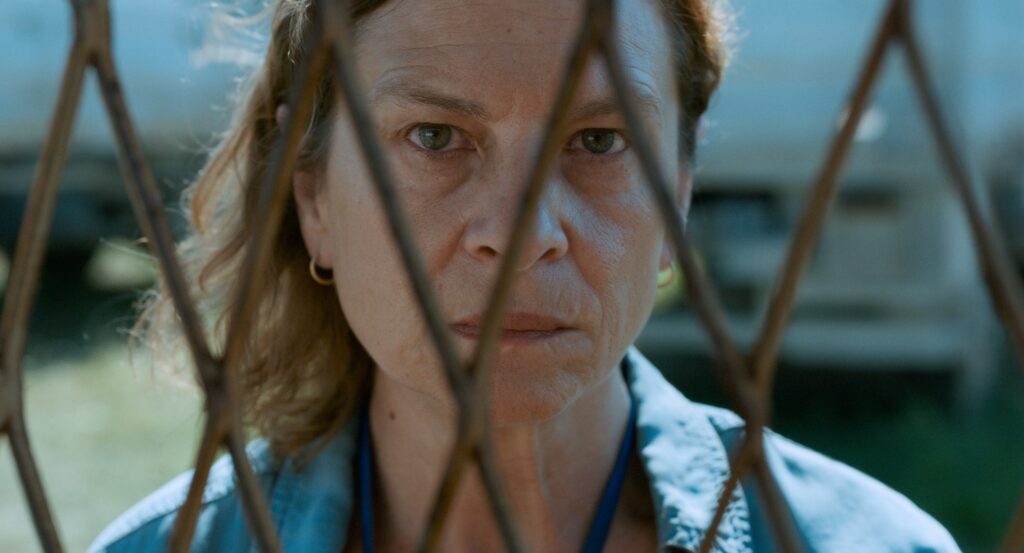 I don’t know if I have seen Quo Vadis, Aida? I know I have sat in front of a screen on four or five separate occasions and taken in portions of the film. But I don’t know whether I have “seen” the film in the way that term is typically used. It is perhaps more accurate to say that I have experienced Aida, or more truthfully still: Aida played, and I was swallowed by grief.

Quo Vadis, Aida? is the Academy Award nominated film by Sarajevo-born director Jasmila Žbanić. It documents the fall of Srebrenica, a town in eastern Bosnia and Herzegovina (BiH), in July 1995 to the Serb nationalist forces led by convicted war criminal Ratko Mladić. The ensuing campaign of extermination—which took place between July 11 and July 22— saw the murder of 8,372 Bosniak (Bosnian Muslim) men and boys and the expulsion of the entire non-Serb population of the town (approximately 25,000 people, primarily women and girls).

Aida is a (barely) fictionalized account of the events that occurred in Srebrenica; it focuses on the protagonist Aida Selmanagić (Jasna Đuričić), a local schoolteacher who has obtained wartime work as a UN translator, and her increasingly untenable position as an intermediary between the incompetent Dutch peacekeepers and the frantic, besieged Bosniak population of the town. The plot is largely based on the real-life experiences of Hasan Nuhanović, as told in his 2007 book Under the UN Flag, but draws thematically on the broader Srebrenica survivors’ literature.

But the Srebrenica Genocide—officially recognized as such by the International Criminal Tribunal— is only the final, horrific culmination of what scholars, researchers, and survivors refer to as the Bosnian Genocide. That is the systematic campaign of extermination, expulsions, torture, and sexual violence carried out in BiH by the Army of the Republika Srpska (VRS) between 1992 and 1995. The genocide targeted primarily the country’s Bosniak community; it was directed by the leadership of the self-declared Republika Srpska (RS) and financed and supplied by their patrons in the Serbian government.

In the film, as the townspeople begin to realize that the UN and the wider international community could not or would not halt the VRS conquest of Srebrenica, panic and terror ensues. Thousands rush to the UN base, trying to find shelter and safety there, while thousands more are forced to wait outside the overcrowded facility, with no shelter or food, as they await their fate. Aida races around the base, forced to translate the lies of the Dutch officers as they instruct the Bosniaks to prepare for evacuation to a “safe place.” Aida knows the truth—that Mladić’s forces are loading the men onto trucks and taking them to be killed. She first tries to hide her teenage sons and husband in obscure corners of the base, which is a repurposed abandoned factory, while she pleads repeatedly, desperately (and ultimately vainly) with her UN employers to ensure their safe passage.

Žbanić insists that, like the UN peacekeepers in Srebrenica, her audience knows what is happening—that it is genocide, and that we are responsible for bearing witness. Twice we see a Dutch junior officer who wears a Star of David pendant observe his superiors equivocate on Aida’s anguished pleas for help. His disgust with his commanders is evident. But for Bosnian viewers there is an added level of poignancy in this obvious reference to the world’s inaction during the Holocaust. 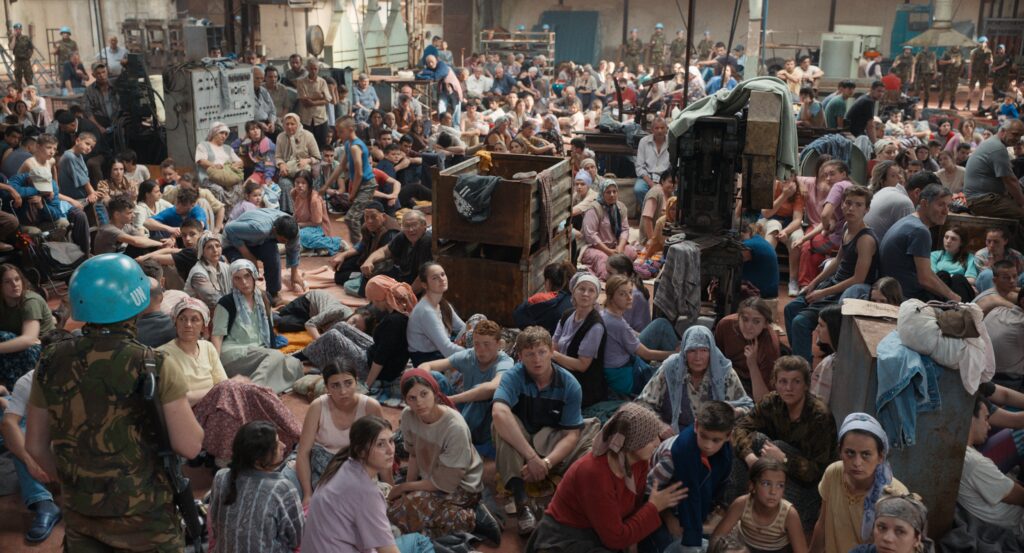 Credit: Elevation PicturesA still from the film shows Bosniaks taking refuge at the UN Dutch peacekeeper base in Srebrenica.

In 1993, at the dedication of the U.S. Holocaust Museum, Elie Wiesel made an impassioned plea to President Clinton, seated only a few paces behind him, to intervene in the conflict: “Mr. President, I cannot NOT tell you something. I have been in the former Yugoslavia, last fall. I cannot sleep since— what I have seen. As a Jew I am saying this, we must do something to stop the bloodshed in that country…Something, anything must be done.”

Nor was Wiesel alone in his testimony. America’s Jewish community was at the forefront of the international effort to demand a credible response to the Bosnian Genocide. In Aida, Žbanić is the one bearing witness to those who saw what was happening in BiH and called it by its proper name.

The film is harrowing. It is an emotional ordeal to sit through for anyone. But for those from BiH, especially for those who have any direct experience or memory of the war, it is almost unbearable. This is also the film’s greatest triumph: it is a story about the Bosnian Genocide, told by Bosnians, for Bosnian audiences. That it has, rightly, won international acclaim is hugely significant, but Žbanić’s crowning achievement is in refusing to tell this story for anyone other than the Bosnian and Bosniak people themselves.

One aspect of that commitment is seen in the director’s remarkable talent for capturing the authenticity of the Bosnian people; their affect, their cadence —how our language sounds when it is whispered. Especially when it is whispered by our mothers; whispered when they, alone, were left to tell us that it would all work out, that we were safe. Knowing that it was not true.

For this Bosnian the film felt almost nauseating in its intimacy. One scarcely experiences the production as a piece of media at all. It took me nearly a week to watch the whole thing, because I could not manage more than twenty or so minutes at a time. My breathing would quicken, verging on hyperventilating; I would realize only after the fact I had been digging my fingers into my thighs, rocking in place.

Such reactions are, obviously, manifestations of being forced to relive trauma. But this too is a testament to the singularity of the work. Because the truth is that Bosnian and Srebrenica Genocide denial is perhaps more rampant today than at any time since the events themselves occurred.

In Serbia, and the RS entity in post-war BiH, denial and negationism are official government policy. Across the territory of the latter, including Srebrenica, returnees are routinely harassed, their properties, community centers, and places of worship defaced. Bosniak children are prevented from referring to and studying the Bosnian language, or learning the history of the genocide. The government in the de facto capital of the entity, Banja Luka, has spent hundreds of thousands of dollars, if not millions, over the last two decades sponsoring the publication of a series of revisionist and negationist accounts of the Bosnian Genocide. Worse, its leadership, headed by Milorad Dodik, is explicitly attempting to engineer the entity’s secession from BiH, and thus the belated realization of a “Greater Serbia” that caused the dissolution of Yugoslavia and the Bosnian War in the first place.

Much as in the 1990s, the international response to all of this is muted at best. Indeed, the very existence of the RS—a product of the U.S.-brokered Dayton Peace Accords in 1995 —is an affront to the survivors of the genocide. As the war-time leadership of the RS acknowledged openly, the sole purpose of its creation was the extermination and expulsion of the Bosniak and non-Serb populations of northwestern and eastern BiH. Even the entity’s name speaks to this; it is a grammatically bizarre construction which does not easily translate to English and barely makes sense in our language. In Western media it’s often incorrectly glossed as “Serb Republic.” In terms of its intended meaning, it is perhaps more accurate to refer to it as “Serbland.” But the result is the same: it is a chauvinist term, meant to erase non-Serbs from the area’s politics, society, and history.

In this sense, the events portrayed in Aida are not history, per se. They occurred in the past, yes, but the politics that caused the horror in Srebrenica, which caused the Bosnian War, remain active and unchanged. No one who has even a passing familiarity with the daily stream of vulgar, sectarian chauvinism emanating from the ruling regimes in Belgrade and Banja Luka could seriously believe that these reactionaries regret the genocide. Or that they would pass up an opportunity to recreate the horrors of Srebrenica— or any of Bosnia’s dozens of other killing fields. One need only recall the warning issued to NATO forces by Serbia’s now President Aleksandar Vučić in the Serbian parliament on July 20, 1995, as the executions in Srebrenica were still ongoing: “Kill one Serb, and we’ll kill a hundred Muslims.”

Today Mr. Vučić presides over a one-party regime in Serbia, just like his mentor Slobodan Milošević. The regime hands out free copies of genocide denial literature to those seeking COVID-19 vaccines. BiH’s friends in Europe, meanwhile, award Nobel Prizes and seats in the House of Lords to genocide deniers like Peter Handke and Claire Fox—that is, when their governments are not busy proposing the country’s partition and dissolution.

The international community watched in real time as the killings in Srebrenica unfolded. They expended more energy trying to wash their hands of any sort of meaningful involvement in the Bosnian War, than they did on implementing the idea of humanitarian intervention. When such action finally came, it only took the deaths of fewer than 30 VRS soldiers for the genocidal regime to concede to negotiations. But by that point, nearly 100,000 other Bosnians had been killed— most of them civilians. The vast majority were Bosniaks, targeted systematically for extermination by the VRS.

Regardless of whether Quo Vadis, Aida? wins the Oscar for best foreign film, Žbanić’s work has already cemented, in searing detail, the truth of the genocide in Srebrenica and BiH. For as determined as the forces of negation and revision are, her work has projected the memory of that terrible crime to the world.

But should she win, Bosnians will weep again—this time, tears of catharsis. Our story, and our survival, will finally be seen and recognized on its own terms.

Nominated for an Academy Award in the best international feature category, 'Aida' forces recognition of a genocide that took place while the world watched passively, and which the Serbian government has spent millions trying to cover up and deny. 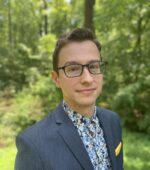 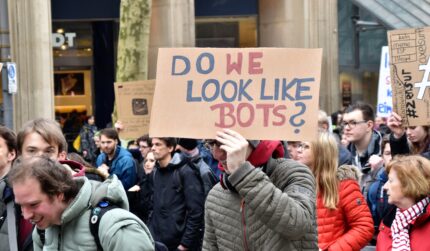 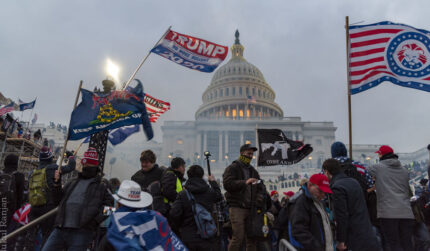 The predictable terror of Trump’s rise and fall