Women are seeing their basic rights rolled back in the era of rising authoritarianism exacerbated by the global pandemic. 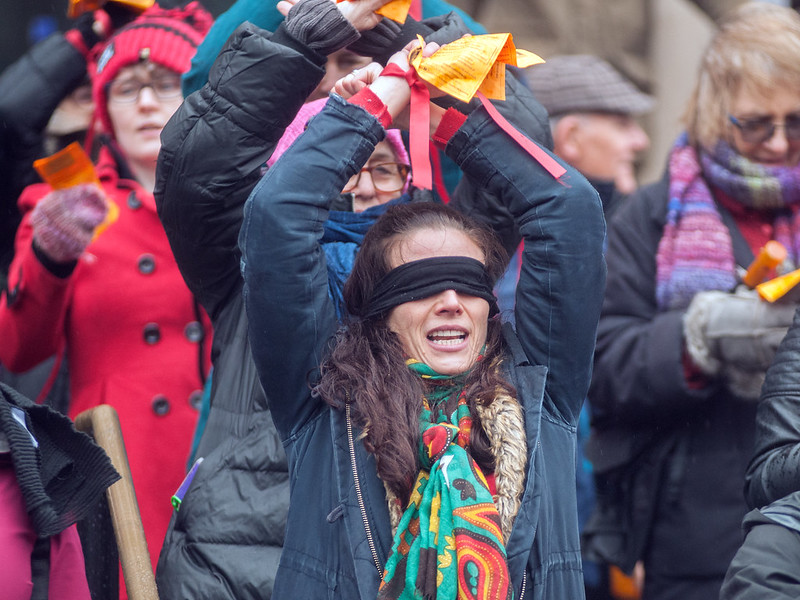 Credit: Tim DennellProtesting violence against women and girls in Sheffield on February 15, 2020.

For the past several decades, the world maintained a shallow consensus, propped up by international human rights law, that women and girl’s rights matter, that it was important to educate them, protect them from violence, and give them the means and opportunities to make a living outside the home.

Although global mainstream discourse and rhetoric around women was nominally positive, even liberatory, women and girl’s material realities still suffered. Among the 1.5 billion people living on one dollar or less a day, the majority are women and children, a phenomenon the sociologist Diana Pierce calls the feminization of poverty. Women and girls make up 70 percent of trafficking victims, according to a 2016 United Nations Office on Drugs and Crime report. As the #MeToo movement has shown, even in allegedly egalitarian countries, women and girls still commonly experience sexual assault and discrimination. Just this morning, Amy Dorris accused Donald Trump of sexually assaulting her, making her the 26th woman to level allegations against him.

Women and girls are perpetually gaslit about the glaring disconnect between the dignity they are told they possess from birth, and its continuous violation. Far too many women and girls aren’t afforded basic rights to begin with. Is it any wonder that a new wave of grassroots, intersectional feminism is growing all over the world, particularly among younger generations of women who broadcast and amplify their activism on social media. The Chilean protest song, Un Violador en tu Camino, A Rapist in Your Path, became a viral feminist anthem against rape culture and personal, state, and institutional complicity.

Now amidst the global COVID-19 pandemic, women are bearing the brunt of the impact. They are losing their jobs at a rate disproportionate to that of men; globally, domestic violence has risen to crisis levels, even as women are forced to shoulder the burden and stress of caregiving and child rearing. Now, with so many school districts having opted to go online, women have had to take on homeschooling as well.

Many states have overtly regressed on women’s rights.  This week major U.S. media outlets published shocking allegations of mass hysterectomies having been performed without informed consent on detained migrant women in a privately run ICE concentration camp in Georgia. The allegations emerged after Dawn Wooten, a nurse at the camp, filed a whistleblower complaint. As one detainee said, “I thought this was like an experimental concentration camp. It was like they’re experimenting with our bodies.” Reports of women being raped in the camps are widespread and ongoing. In a federal lawsuit filed in May 2020, a Mexican woman said she was sexually assaulted and impregnated at an immigrant detention facility in Houston hours before she was deported to Mexico.

Last year, the Department of Justice’s Office on Violence Against Women narrowed its definition of domestic violence to felonies or misdemeanors, in a move similar to Russia’s decriminalization of most non-lethal forms of domestic violence in 2017. In recent months Turkey and Poland have been threatening to leave the Istanbul Convention, an international treaty on domestic violence.

We’re in an era of chest-thumping authoritarians, (Trump, Duterte, Modi, Xi, Putin, Erdogan, Bolsonaro, Netanyahu, MBS, Kim Jong-Un) who, despite their diverse religions, ideologies, and geopolitical backgrounds, are universally patriarchal. Women’s subordination is a given, and deviations are punishable with cruelty. Fundamentalist religions, men’s rights movements, and incels have fueled misogynist terror and aggrieved men’s reactionary backlash against women’s empowerment. Their growing political success is costing women their lives.

Misogyny is key to understanding the male entitlement powering the global trend away from feminine-coded social democracy and toward toxic masculine authoritarianism.

I use the definitions of feminist philosopher Kate Manne, who, in her books Down Girl: The Logic of Misogyny and Entitled, makes an important distinction between sexism and misogyny. Sexism, she writes, is the “theoretical and ideological branch of patriarchy: the beliefs, ideas, and assumptions that serve to rationalize and naturalize patriarchal norms and expectations—including a gendered division of labor, and men’s dominance over women in areas of traditionally male power and authority.”

Misogyny, she says, “should not be understood as a monolithic, deep-seated psychological hatred of girls and women. Instead, it’s best conceptualized as the “law enforcement” branch of patriarchy—a system that functions to police and enforce gendered norms and expectations, and involves girls and women facing disproportionately or distinctively hostile treatment because of their gender, among other factors.”

The focus is thus flipped from perpetrator to victim. Rather than concern ourselves with men’s intentions, which are easily denied and impossible to prove, misogyny is the hostile treatment women and girls experience when they step outside gender roles or are perceived to.

Separating sexism from misogyny is necessary to understanding the current attacks on women’s rights. As Manne noted in a recent  interview with Isaac Chotiner for The New Yorker, “There is this somewhat new phenomenon of men who believe women are perfectly competent and will take advantage of their talents, but who will smack them down if they try to assert their authority over a patriarchal figure.”

Misogynists who happily exploit women’s talents while still maintaining patriarchal order are everywhere. Look at Trump and Ivanka, or Erdogan and his daughter, Sümeyye Erdoğan Bayraktar. Their idea of women’s rights is a bouquet of flowers, a refrigerator, and a demand to have more babies, but only if you’re of their preferred ethnic or religious group.

At the same time, women, once empowered, never forget what power and respect look and feel like. Absent sexism, misogyny grates more harshly, and brutish patriarchal power plays become more transparent. Women are organizing locally and sharing their struggles online. They’re speaking out like never before, whether it’s the women who brought down Harvey Weinstein, or the Turkish feminists sharing black and white photos on Instagram.

What exactly is being rolled back, and how do we fight it?

For decades, women have been fighting for recognition and protections in international laws.

The first major international treaty on women’s rights, the Convention on the Elimination of all Forms of Discrimination Against Women (CEDAW) was adopted in 1979. In 1995, Hillary Clinton famously said, “women’s rights are human rights, and human rights are women’s rights” to the United Nations Fourth World Conference on Women in Beijing, China. In 2014, education activist Malala Yousafzai became the youngest person to be awarded the Nobel Peace Prize, after the Taliban shot her in the head as punishment for advocating the right to education for Pakistani girls.

The Istanbul Convention was held in response to the European Court of Human Rights (ECHR) 2009 ruling in Opuz v Turkey, which found that Turkish authorities failed to protect Nahide Opuz from her ex-husband’s years-long abuse, even after he stabbed her repeatedly and murdered her mother. Turkey hosted the convention, and became the first country to sign and ratify the treaty on March 12, 2012. Since then, 45 countries and the EU have signed.

Two sections of the treaty stand out:

Another direct shot at patriarchy and organized religion. At the root of toxic male entitlement is the idea that male honor is more valuable than a woman’s life. Look at Trump directing Bill Barr’s Department of Justice to take over the defamation case brought by columnist E. Jean Carroll, who alleges that the President sexually assaulted her and then called her a liar.

It is these attacks on patriarchy that have triggered the misogynists. Turkish feminist Feride Eralp, who recently was interviewed for The Conversationalist about the anti-femicide protests in her country, calls this the anti-gender movement.

Erdogan’s government, said Eralp, had established a pattern of announcing extremely controversial policies regarding women’s freedoms and equality in order to “gauge public reaction.” If the reaction is overwhelmingly negative, the government postpones until public memory fades, only to re-introduce it. “It’s an incredibly frustrating government tactic, because it [makes it] impossible to achieve lasting gains.”

In 2016, for example, the government tried to pass a law that would give amnesty to male sex offenders if they agreed to marry their underage female victims. Widespread public outrage led to the tabling of the legislation, but the government continues periodically to reintroduce it with slight changes. “It’s the same with the Istanbul Convention,” Eralp said.

Turkish women have been protesting rising rates of femicide for well over a decade, demanding that the government  implement the Istanbul Convention—and that it enforce the law that specifically protects women from domestic violence. Recently, Polish and Turkish women protested in solidarity with one another against their respective governments, and the ultra-conservative Catholics and Islamists who are lobbying to preserve “traditional family structures,” aka free labor, at the expense of women’s lives.

Eralp argues, however, that unlike grassroots women’s movements, the Turkish men importing these new formulations aren’t seeking solidarity with other men, but rather want to adopt effective tactics to keep women in their place. This is a cynical move by ultraconservative men who are taking advantage of Erdoğan’s weakening political position to backtrack on women’s rights, she argued. Turkish ultra-conservatives have adopted “pro-family” anti-LGBTQ tactics from their Catholic neighbors that Americans will be familiar with: white Evangelicals have long stoked moral panic among conservatives about feminists, single mothers, abortion, and gay and trans rights.

Gains for women in America are being erased in law, too. Decades of legal advocacy efforts brought about a series of legal breakthroughs in recognizing domestic violence as a basis for protection in asylum law in the United States, only to have them dashed in 2018 by Jeff Sessions. Betsy DeVos’s Department of Education’s new rule undoing protections for campus assault victims under Title IX went into effect last month, to the delight of men’s rights groups.

Abortion rights are perpetually under attack, as conservatives gain seats in federal courts, and acts of misogynist terror, whether its intimate partner violence or mass shootings, are increasingly common. Anti-semitic QANON supporters are obsessed with human trafficking conspiracies, while the President is trafficking thousands of children across the border in front of our eyes.

The picture is bleak, and the struggle will be hard. But as we have reported—and will continue to report, here at The Conversationalist—women everywhere are strengthening their own sense of entitlement – their right to life, to bodily autonomy, to political opinions — to being a full human being independent of men. Women and their allies are motivated, organized, and pushing back in new, creative ways at the grassroots and institutional level.

Women and girls are perpetually gaslit about the glaring disconnect between the dignity they are told they possess from birth, and its continuous violation. 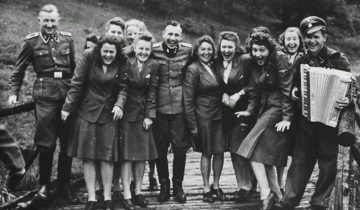 What were the Nazis thinking when they killed all those people? 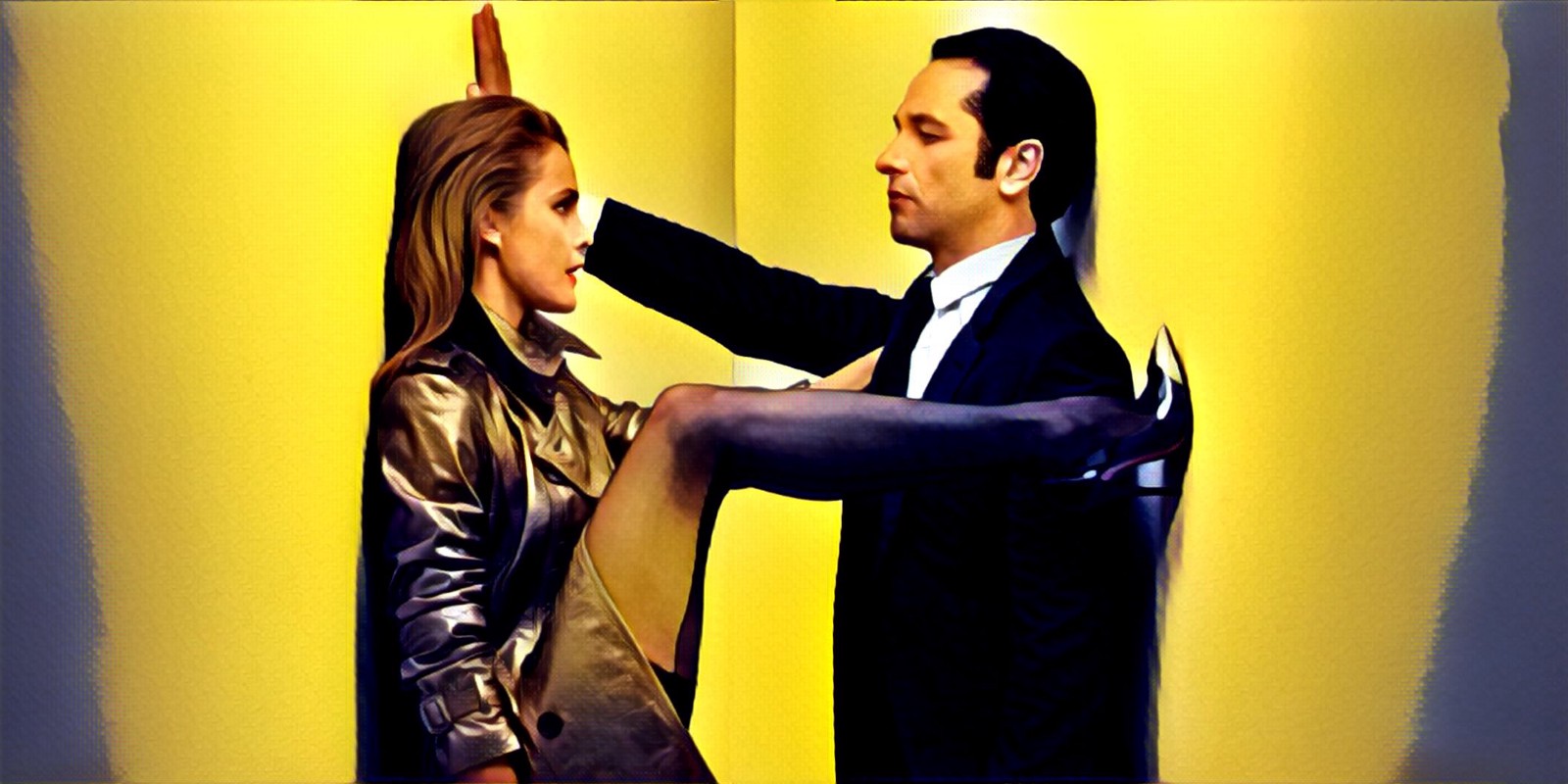 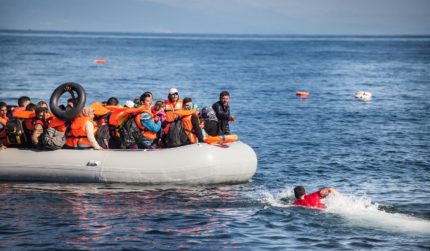 ‘Saving lives is not a crime’: when ordinary people sacrifice everything in the name of humanity