The Syria crisis has provided a clear issue for Democrats in pursuing their impeachment inquiry.

When Nancy Pelosi took the ‘extraordinary‘ step of initiating impeachment proceedings against President Trump on September 24, the consensus among even those who had for months been calling upon her to do so was that the Republican-dominated Senate would block his removal from office. Over the ensuing three weeks, however, a series of seismic occurrences have upended received wisdom. As prominent historian and journalist Heather Cox Richardson wrote yesterday in a long Facebook post, it feels “as though the nation has shifted.” The immediate catalyst for this shift was Trump’s decision to withdraw U.S. military support from the Kurdish stronghold in northeastern Syria, and to suspend military aid to the Kurds. This, coming on the back of some stunning revelations about Trump’s dealings in Ukraine, have finally cracked the wall of Republican support for the president.

‘I want you to do us a favor though’

The original reason for the impeachment hearings was a whistleblower complaint from an unnamed CIA officer who had been assigned to the White House. According to the complaint, which several media outlets published in its entirety, Trump indirectly told the newly elected president of Ukraine, Volodymyr Zelensky, that he wanted Ukraine to manufacture dirt on Joe Biden. During their phone conversation, Trump used a phrase that could be the 10 words that sink his presidency: “I want you to do us a favor though.” The “though” implies that Trump was asking for a quid pro quo — a personal service for his own benefit. Then it emerged that Trump had held up the release of a $400 million military aid package to Ukraine. Since that aid package had been approved by Congress in July, the president was in effect withholding taxpayer money for his personal use.

Trump tried, of course, to obfuscate by claiming the whistleblower had made false accusations and insisting that his conversation with Zelensky had been “a perfect phone call.” Republican senators continued to defend Trump. Their constituents still supported the president, believing his claims that the allegations regarding the phone call were untrue or misunderstood. Since impeachment is a political process and not a trial, GOP lawmakers were not going to risk being voted out of office by angry Trump supporters. The impeachment inquiry would continue, but with little chance of the president being forced out of office.

On October 6, Trump announced abruptly that he was withdrawing U.S. military support for Kurdish forces in northeastern Syria. The Kurds were U.S. allies; they had fought and destroyed the Islamic State, which cost the lives of an estimated 11,000 soldiers. Turkey, however, regarded the Kurds as terrorists. As soon as American commandos pulled out of the Kurdish stronghold, Turkey launched a military attack that has shocked the world with its brutality.

Besides the horrific moral implications of abandoning the Kurds after they had saved the U.S. from deploying its own troops to fight the Islamic State, Trump’s decision to pull out of northeastern Syria is a diplomatic and security catastrophe. America has given up its leverage in the region, indicated to any future allies that they cannot be trusted, and possibly provided an opportunity for ISIS to resurrect itself.

Kurdish forces that were guarding 11,000 captured ISIS fighters had to abandon the prison camps in order to fight Turkish forces; many of those ISIS prisoners simply walked out of the camps — presumably to fight another day; indeed, there has already been a spike in ISIS attacks against the Syrian Democratic Forces (SDF), the anti-Assad forces that were also U.S. allies. Meanwhile Putin rushed to fill the territorial vacuum, deploying Russian soldiers to the area. Some of them posted triumphal videos taken at abandoned U.S. military bases.

Cracks in the wall

Even stalwart Trump supporters were appalled at the extent to which Trump had undermined American security and its national interests. Senator Lindsey Graham, a national security hawk, issued scathing tweets accusing the president of creating “a complete and utter national security disaster.”

I worry we will not have allies in the future against radical Islam, ISIS will reemerge, & Iran’s rise in Syria will become a nightmare for Israel.

I fear this is a complete and utter national security disaster in the making and I hope President Trump will adjust his thinking.

This was Nancy Pelosi’s moment. At a fraught White House meeting regarding the Trump administration’s Syria policy, she stood to confront the president, pointing her finger at him as his aides hung their heads. An unnamed White House photographer caught what has already become an iconic image, the subject of in-depth analysis by art historians and culture critics, and which Pelosi promptly posted as her new header on Twitter. 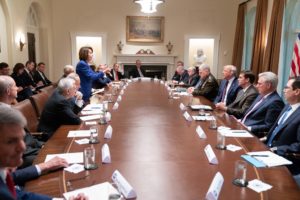 Trump is now an embattled president, and he knows it. But his base remains loyal, and that will probably never change. The question is whether the institutions of the state, after three years of relentless assault, remain sufficiently robust to support the democratic process of impeachment.

For more analysis of this extraordinary historical moment: 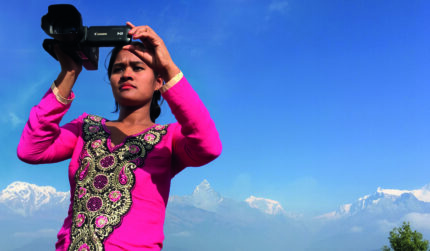 ‘I Am Belmaya’: film review 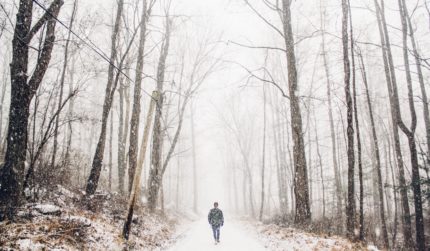 Lessons in resistance at a former yoga ashram 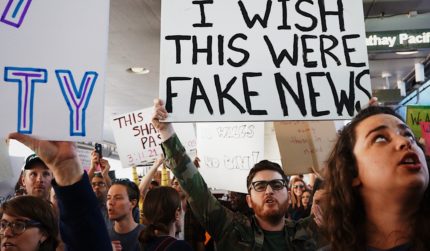 How can we stop social media from manipulating our emotions?