The MeToo movement inspired a much-needed conversation about the treatment of women at the hands of powerful men. For the past year and half, those with “an upper hand” have learned it’s best to keep both hands to themselves. Society is finally beginning to internalize the understanding that women are not mere sexual objects. 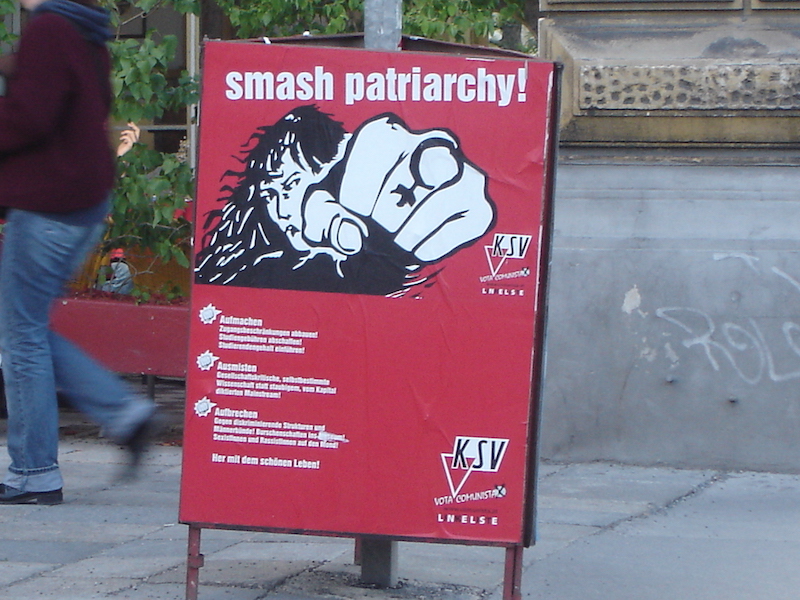 "Smash the patriarchy": spotted in Vienna (Sara/Flickr, May 2005)

But while that same society has cautioned men about their behavior, it has done little to widen their perspectives about who women are – and can be: experts.

We are still far behind in acknowledging and learning from the knowledge and contributions of women who are leading experts in a wide range of professional fields. This is especially true in science, technology, finance, law, and national security. “Expertise” in these fields is still one-dimensional and dominated by men. Given the enormous challenges we face today – from climate change to extremism and pandemics to inequality, it is imperative that we graduate from peering at the world through a peephole and instead look at it through a much wider frame.

In 2018 my organization, Foreign Policy Interrupted (FPI), released a study that looked at foreign policy op-eds across three one-year periods, in four major U.S. newspapers. The op-eds we examined were on a broad variety of topics that included global affairs, national security, war, development, human rights, global trade and commerce, and bilateral and multilateral issues. We found that over a 20-year period, from 1996-2016, women authored only 15 percent of all the op-eds published in those four newspapers.

“Women don’t pitch,” is the response commonly heard from editors. Often they will add that “women lack confidence.” In this way they place the blame on women, rather than acknowledging a fact of which all women are aware: that the majority of institutions, such as government, finance, and media, were and still are man-made and male-dominated. The same is true for the professional and social networks from which those experts are selected.

Women have been struggling for decades just to break into those institutions and networks — never mind actually rise in the ranks and become influencers. It is still the case that most editors, producers, and reporters are men, as a study published this week shows, and men are unlikely to seek out female experts. The result is that the public does not hear from leading experts who could bring real insight to pressing issues.

In an article I co-authored last August for the Columbia Journalism Review, I note that journalists tend to return to the same sources because they are “…driven by the pressure to produce ever more content with ever fewer resources.” When breaking news hits, journalists, editors, and producers are under tremendous deadline pressure, and so they do not have the time or inclination to research and talk to real experts. Instead, they go directly to the people working on and influencing an issue. If it’s North Korea, the media is knocking at the National Security Council and Defense Department. If it’s the Amazon headquarters deal in New York City, the media calls up contacts in the tech industry. If it’s a drop in the NASDAQ, the media rushes to Wall Street bankers and investors.

In each case, men occupy the top spots – which means, of course, that the reporting on these stories is dominated by opinions expressed by men. These men are presented as the “experts,” but in fact they are the kingmakers. They drive the narrative – not to share understanding, but to justify their own positions and decisions.

This is a dangerous state of affairs. The public is led to believe that their media platforms present them with the best information, when in fact they are mostly presenting them with information that happens to be the easiest and quickest to obtain. The troubling result is an opinionated public that believes it is well-informed, when it is actually being kept in the dark.

Because female expertise has for so long been ignored or minimized, women who pitch opinion pieces to media outlets are often held to a different, harsher standard than a man. When, for example, Beatrice Fihn, the director of the International Campaign to Abolish Nuclear Weapons, pitched a piece about her work on disarmament in the fall of 2017, editors turned it down on the grounds that it was “too idealistic” or not “hard hitting.” Several months later Ms. Fihn accepted the Nobel Peace Prize on behalf of her organization.

Perhaps it is, indeed, “idealistic” to campaign for the abolishment of nuclear weapons. But that campaign represents an important point of view that adds another dimension to a consequential topic — specifically, the fate of humanity. The only way we are going to hear about these added dimensions is by reaching beyond the status quo and tapping into different experiences and backgrounds. That is true not only for women, but also for people of color.

The consequences of ignoring women and other diverse voices are far reaching. Not only are we presented with an incomplete picture but, even more gravely, we are overlooking the people who have the knowledge and skills to help us all reach comprehensive solutions to serious problems. When women participate in peace talks, for example, agreements are 64 percent less likely to fail. When women play a role in creating a peace process, the resulting agreement is 35 percent more likely to last at least 15 years.

How to do better

A number of journalists have made an effort to seek out alternative voices. Ed Young from The Atlantic has talked about the efforts he has put in to diversify his sources, doing extra work to find women in science. A number of other journalists have contacted me about female voices in foreign policy, namely from NPR, and Australia’s ABC. Bloomberg has also reached out. Time, CNN, and The New Republic have been champions — in each case, because female editors have taken the lead.

Given the enormity of global challenges and the rapid pace at which the world is changing, it is vitally incumbent upon editors to widen their scope. They must consider pitches from voices that diverge from the ones they are accustomed to hearing, and they must be open to different perspectives — even if they sound “idealistic.” When editors make the effort to expand their worldview, they will find numerous resources to support their work.  FPI’s Friday newsletter, SheSource,  Women Also Know Stuff, and Sourcelist, list female experts in all areas, in multitudes.

The point is not to reach down and pull women up. Rather, it is to throw off the blinders and reach wide to grasp the abundant and multidimensional expertise that will make the world a better place for all of us.

Elmira Bayrasli is the author of  From The Other Side of The World: Extraordinary Entrepreneurs, Unlikely Places. She is the co-founder and CEO of Foreign Policy Interrupted and teaches at Bard College. She lives in Brooklyn, New York.