The regional economy is in a free fall due to political unrest, military closures, and the pandemic. 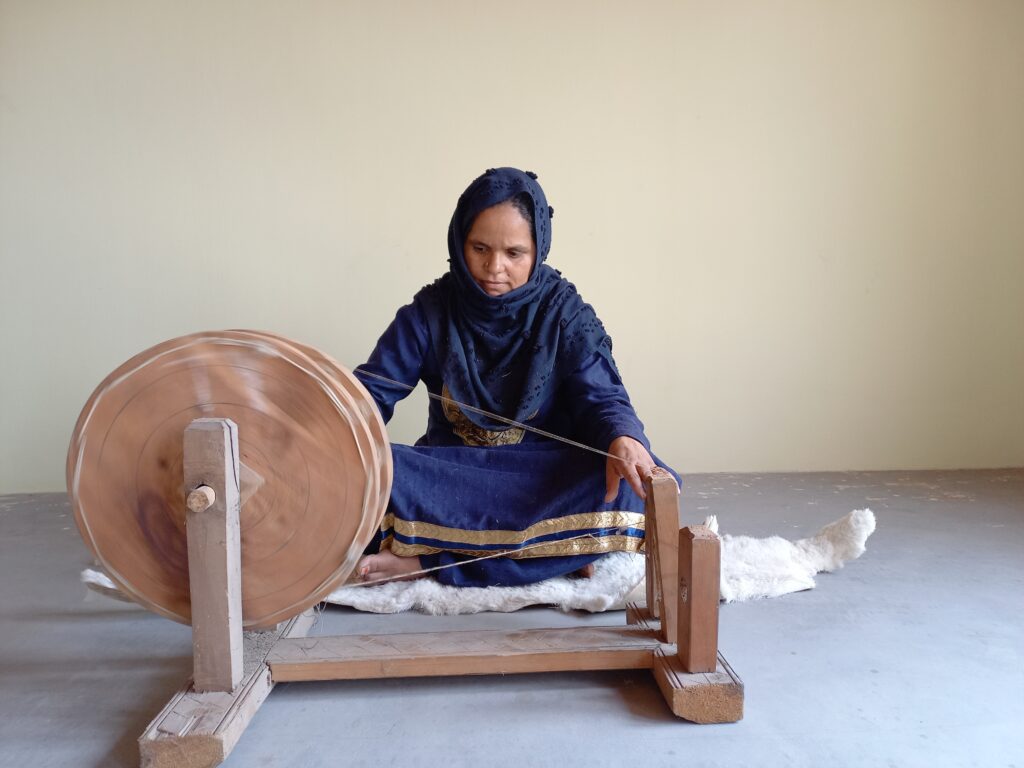 Five minutes’ walk from Srinagar’s Jamia Masjid, the largest mosque in Kashmir, is a modest two-story house. This is where Sakeena, 73, lives—and where she has been spinning pashmina wool by hand for more than a decade. She’s well known for her skill in spinning the finest and most delicate yarn from the region’s world-famous wool.

Zain-ul-Abidin, the fifteenth-century Sultan of Kashmir, introduced the art of pashmina weaving. He brought craftsmen from Persia to teach the local population various skills, which included making the wool shawls that are to this day a sought-after luxury item around the world. Kashmiri women have long been artisans of this heritage craft.

For Sakeena, weaving was a means of achieving economic stability. Her mother taught her and her two sisters to spin when she was an adolescent; when she married, she bought a spinning wheel (called a “yinder” in Kashmiri) for RS24, or about $0.32, and used her income to supplement the earnings of her husband, who was a tailor. “I used to earn RS150 ($2) for working five hours a day,” she said, explaining that “back then, that was enough for two proper meals.”

Until the 1990s pashmina wool was spun and woven at artisanal centers all over Kashmir. But with the rise of the Kashmiri armed struggle and the Indian government’s military response, curfews and lockdowns led to a shift: people are now working primarily from home. A few remaining traditional spinners live in pockets of Srinagar, the capital of Kashmir. Sakeena is one of them, but she said that now there is “either no work or the wages paid are not enough to pay for one proper meal.”

The long military lockdowns of the past few years precipitated the decline of the pashmina industry by preventing or discouraging buyers from visiting the disputed territory. As a result, the number of female spinners has declined from a high of 100,000 in 2007 to just 15,360 in 2021, according to The Directorate of Handicrafts & Handlooms in Kashmir.

“Foreign tourists used to come to Kashmir to buy the shawls,” said Sakeena. But no longer. “My daughters have three yinders that have been lying unused for the last year in our attic,” she lamented, adding that they will sell them if the current situation continues much longer. “The Indian government promises to empower people, but in Kashmir, they are doing the opposite by making us economically weaker,” she said.

The politically unstable situation, the prolonged military lockdowns, and now the pandemic, have pushed the regional economy into a free fall. According to a 2020 report issued by the Kashmir Chamber of Commerce and Industry, more than 100,000 private sector jobs were cut after August 2019, when the Modi government precipitated an ongoing political crisis by revoking the Muslim-majority territory’s limited autonomy.

Adnan Bashir, who owns a pashmina showroom on the banks of Dal Lake, one of Kashmir’s most renowned natural beauty spots, said that the months-long communications shutdown had severely undermined his business. “Around eight international orders were canceled because I was not able to contact the customer [due to the suspension of internet and mobile connectivity],” he said. One customer from Germany canceled a buying trip due to the military curfews. Bashir described his business’s condition as “critical,” and said he might have to look for another way to make a living.

Fahmeeda, a 67-year-old widow who asked that her real name be withheld, reluctantly sold her yinder last year for financial reasons. It had been a gift from her mother, she said, but she needed the money to buy medicine for her son. “This used to be a blessed craft for women like me,” she said, adding that she had supported her children with the money she made from spinning. “Last year, when Kashmir was under strict lockdown, I went out to purchase raw wool but soldiers chased me away by hitting me with their sticks,” she wept. She now works as a cleaner in a private school for RS800 (just over $10) a month—compared to RS2600 ($35) before the lockdown that began in August 2019.

A recent shortage of raw pashmina has dealt yet another blow to the industry. Ordinarily the wool is imported from Ladakh, which lies on the disputed and ill-defined border between India and China; but in June long-simmering political tension erupted in a military clash that left 20 Indian soldiers dead and caused the suspension of trade between the two regions.

The introduction of power looms presents yet another threat to the 600-year-old pashmina craft. Merchants and artisans led a protest in late June to demand a ban on these looms, which pose a threat to the livelihoods of thousands of Kashmiris. The 1985 Handloom Protection Act forbids the industrialization of pashmina production, said Muhammad Lateef Salati, an activist from a family long engaged in artisanal pashmina production. The government, however, has failed to enforce the law.

Industrially produced pashmina is often sold falsely as authentic traditionally produced wool—a practice that undermines the value of the brand. By failing to enforce the law against manufacturers of mass-produced pashmina, the government shows that it is “not serious” about protecting the craft, said Salati.

Some Kashmiris are trying to safeguard traditional pashmina production by empowering local artisans.

Murcy, the daughter of a family long engaged in traditional pashmina production who divides her time between New Delhi and Srinagar, recently launched Fair Share Cashmere, a socially conscious online business initiative to sell hand-spun shawls made by local artisans. She said that she pays traditional female spinners the highest rate the market will bear. “We have been successful in bringing eight women back to this craft,” she said, adding with a smile that this “feels like a victory.”

The decline of traditional pashmina production in Kashmir has created a vacuum of employment for women who could once depend on the income they made from spinning wool to ensure that their families were fed. Now they are unemployed and, for the most part, voiceless. Murcy is one of a handful of locals who are trying to preserve the remnants of a once-thriving artisanal craft, despite the enormous political and economic challenges.

Kashmiri women could once feed their families with money earned from traditional wool spinning. Then came martial law, border disputes, and a pandemic. 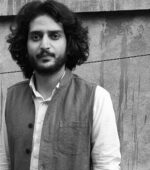 Shoaib Mir is an independent journalist from Indian-administered Kashmir currently based in New Delhi, India. He writes about conflict, gender, and the refugee crisis. On Twitter: @Imshoaibmir .

Shoaib Mir is an independent journalist from Indian-administered Kashmir currently based in New Delhi, India. He writes about conflict, gender, and the refugee crisis. On Twitter: @Imshoaibmir .