Activists and civil society groups are outraged at the prime minister’s victim blaming. 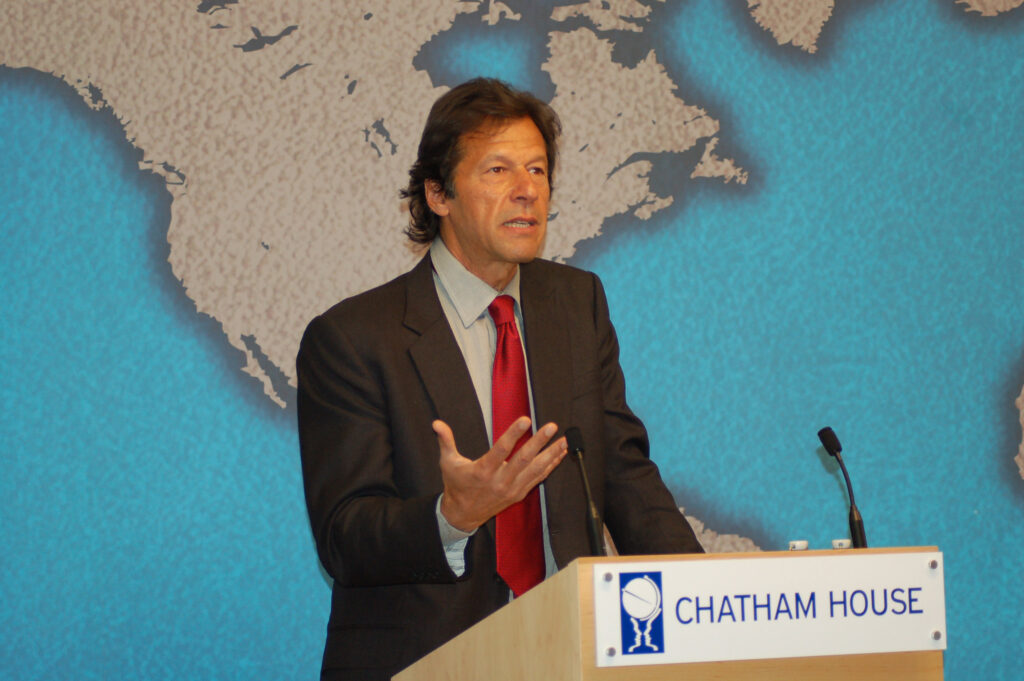 In Pakistan, the first thing a woman thinks of when she steps outside her home is rape. In a country that routinely ranks as one of the most dangerous in the world for women, rape is everywhere. Women live in constant fear of predators, who routinely go unpunished not because the law protects them (it does not), but because attitudes in this deeply conservative culture manifest in a lack of will to enforce them. Recently Imran Khan, the prime minister of Pakistan, reinforced this entrenched misogyny when he claimed that vulgarity, temptation and willpower were among the causes of rape.

Before he became a politician, Imran Khan was an international cricket champion and a national hero. Oxford educated, handsome, fair skinned and an eloquent speaker, he embodies the quintessential colonial concept of the “white man” coming to save the damsel in distress Pakistan was made out to be. When he was elected prime minister, the media dubbed him the leader of “naya Pakistan” (new Pakistan).

But this, I knew, was a lie. Imran Khan has a well-documented history of misogyny.

In 2006, he rejected the Protection of Women’s Rights Bill, which amended the 1979 Hudood Ordinances that put the entire onus of proving a rape accusation on the woman. The 2006 Bill did pass a parliamentary vote, no thanks to Khan; but prior to this legislation, a rape victim could be prosecuted and imprisoned for adultery if she failed to produce an adult male witness to her assault.

Ayesha Gulalai, a human rights activist who in 2013 became the first female member of the National Assembly, accused Khan of sexual harassment; according to Gulalai, the prime minister sent lewd messages to her and other women in the progressive Pakistan Tehreek-e-Insaf party. For having made this accusation, Gulalai received death threats.

In 2018, Khan said that feminism was “degenerating” to motherhood and called it a “western concept.”

In 2020, he said that the Aurat (women’s) March was culturally divisive.

This year, Khan presented a Pride of Performance award to Ali Zafar, a prominent singer-songwriter who has been credibly accused of sexual harassment by several leading female artists. The prime minister did not even acknowledge an open letter from feminist activists who asked him to refrain from conferring the award, given that one of Zafar’s accusers, singer-actress Meesha Shafi (who plays the protagonist’s sister in the 2013 film The Reluctant Fundamentalist)  was pursuing legal action against him.

In a Q&A session with the public that was televised live in early April, a journalist asked Prime Minister Khan what steps he would take to tackle rape and child abuse. Instead of answering the question, he said: “In any society where vulgarity is prevalent, there are consequences.”

Vulgarity is a broad term. What’s vulgar for one person, might not be for the other. But in this case, Khan was using the word to blame the victims. Over the past three years, Pakistan has seen a spike in widely publicized, extremely violent rapes. One of the victims was 6 year-old Zainab Ansari, whose body was found in a rubbish dump in 2018; she had been raped and strangled. In another notorious case that made international headlines last April, a woman was gang-raped in front of her children after she stopped at the side of a highway just outside of Lahore because her car had run out of fuel.

During the same televised Q&A session, Khan held women responsible for the behavior of men, saying they should remove “temptation” because “not everyone has willpower.” He claimed the high rape statistics were a consequence of “increasing obscenity.” Bollywood films and an infatuation with Western lifestyle were to blame, said the prime minister.

With those words, Khan diminished every person who has stood up against rape, every victim who came out with their story; and every woman, trans and non-binary individual that marched against rape. By saying that women should take “purdah” (cover themselves from head to toe), he reiterated the notion that the onus is upon women to protect themselves. There will be no safety in Pakistan, no justice. There will simply be women constantly berated for taking up space.

In 2020, 11 rape cases were reported every single day in Pakistan. But only 77, or 0.3 percent, of the accused have been convicted. According to government statistics, fewer than half the women who report having been raped end up pressing charges; police estimate that the actual number of rapes could be closer to 60,000 annually. Women are instantly labeled liars when they press charges against their rapists. Sometimes the consequence is more fatal, as seen in cases of so-called “honor killings,” whereby the male relatives of an unmarried rape victim take her life because she is no longer a virgin. Women are sometimes forced to marry their rapist to save their family from scandal. In other cases, families choose revenge rape as a “solution.”

The system usually works against survivors. In the case of the woman who was gang raped on the highway, Capital City Police Officer Umar Sheikh blamed the victim, asking reporters rhetorically why she was traveling with her children late at night.

Mehnaz Akber Aziz, a member of Pakistan’s National Assembly and a children’s rights advocate said: “You are signalling to these people, the rapists, that ‘It’s OK, you can continue doing what you’re doing and there will be a way out, even if you’re arrested.” Pakistan’s police and judiciary generally fail to apply the law robustly in rape cases where there are no witnesses.

But there are organizations and activists working to force law enforcement officers and the judiciary into implementing the laws that are supposed to protect women.

Sahil provides free legal aid for children and women who have been victims of abuse. War Against Rape (WAR) provides rehabilitation for survivors of sexual assault and works with them to deal with their medical, legal and social issues. Earlier this year, The Lahore High Court declared the “two finger test”—used to determine whether a sexual assault survivor was a virgin—as illegal.

The Zainab Alert Response and Recovery Act, 2020 was passed under the Children’s Protection Bill to criminalize abduction and kidnapping. Anti-Rape Ordinance 2020 was approved to ensure that sexual assault trials are completed within four months and that victims’ identities will be protected.

Each of these organizations is committed to tackling Pakistan’s rape problem. And yet, Prime Minister Khan did not mention any of them. Instead, he left Pakistan’s women in a more vulnerable and precarious state than ever before. The country does have laws that, if enforced, would help combat sexual violence. What it does not have, however, is a leader who sets an example by working with existing organizations to change the entrenched patriarchal attitudes that prevent women from feeling safe in public. Nor does it have a leader who is committed to public education.  If the prime minister of a country where the literacy rate has fallen below 60 percent says that men aren’t able to control their instincts and that women must be covered from head to toe if they want to remain safe, the masses will believe it.

Sheraz Ahmed, the program officer at WAR, noted that Khan’s remarks demonstrated “a clear pattern that reveals his regressive views of rape and sexual violence.” Asked why rape cases in Pakistan are so high, and what measures need to be taken to make women safer, Ahmed said, “Rapists know they will get off the hook and that’s why cases are rising.” The lack of medical and psychological care available for rape survivors places even more stress on the woman, which often factors into a decision to refrain from pressing charges.

Several organizations—including Women’s Action Forums of Pakistan, War Against Rape, Aurat March Lahore, The Human Rights Commission of Pakistan, and The Women’s Lawyer Association—have demanded an apology from Imran Khan. In a statement of condemnation that has, as of this writing, been signed by 438 people, they describe the prime minister’s comments as “factually incorrect, insensitive and dangerous,” adding that they “actively fostered and promoted rape culture.”

The Human Rights Commission of Pakistan said in a statement that they were “appalled” by the prime minister’s remarks, describing them as “unacceptable behavior on the part of a public leader” and demanding that he apologize.

♀️ HRCP is appalled by PM @ImranKhanPTI‘s recent remarks linking the incidence of rape to ‘obscenity’ and suggesting that ‘purdah’ would contain the problem. This is unacceptable behaviour on the part of a public leader. pic.twitter.com/5jeH5IG8uJ

Jemima Khan, the prime minister’s former wife (and mother of his two children), tweeted: “The Imran I knew used to say, “Put a veil on the man’s eyes not on the woman.””

I’m hoping this is a misquote/ mistranslation. The Imran I knew used to say, “Put a veil on the man’s eyes not on the woman.” https://t.co/NekU0QklnL

The response on Pakistani Twitter, meanwhile, has been scathing.

This time, the anger does not seem likely to abate; it will continue to fester until there is systemic change and a decisive shift in the conservative narrative regarding rape in Pakistan. Over the past two years Pakistan has seen a rising feminist movement; now, with the growing Aurat Marches and the opening up of the #MeinBhi (MeToo) movement, something has shifted. The women of Pakistan will no longer be dismissed when it comes to sharing their truths.

In many South Asian countries there is widespread scepticism about the #MeToo movement. Why, people ask, does it even exist? Why don’t women who are molested immediately speak out and share their stories? The answer, or part of it, can be found in Khan’s remarks. Whether he believes them or not is irrelevant; he has exacerbated the dangers women face by reinforcing the primitive idea that men are driven by animalistic instincts and are physically incapable of controlling themselves in the presence of a woman.

Imran Khan has a bit of a nefarious past, with his playboy reputation and his hypocrisy towards women. But it is his actions and words today that demonstrate yet again how men in power use their privilege to reinforce only one truth—their own.

In a live television Q&A, Khan held women responsible for the behavior of men, saying they should remove 'temptation' because 'not everyone has willpower.' 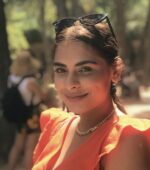 Maheen Humayun is a journalist, poet and educator based in Pakistan. Her novella, Special, was published in 2021 and she continues to write short fiction and opinion-based pieces. Her work focuses on mental health, intersectionality, gender and social justice. In her free time, you can find her drinking copious amounts of black coffee, learning digital art and performing spoken word poetry. She tweets @maheenhumayun and shares bite-sized fiction on Instagram @girloncobblestones.

Maheen Humayun is a journalist, poet and educator based in Pakistan. Her novella, Special, was published in 2021 and she continues to write short fiction and opinion-based pieces. Her work focuses on mental health, intersectionality, gender and social justice. In her free time, you can find her drinking copious amounts of black coffee, learning digital art and performing spoken word poetry. She tweets @maheenhumayun and shares bite-sized fiction on Instagram @girloncobblestones.