Elite evangelicals who oppose the current president built their careers on the culture wars that brought him to power. 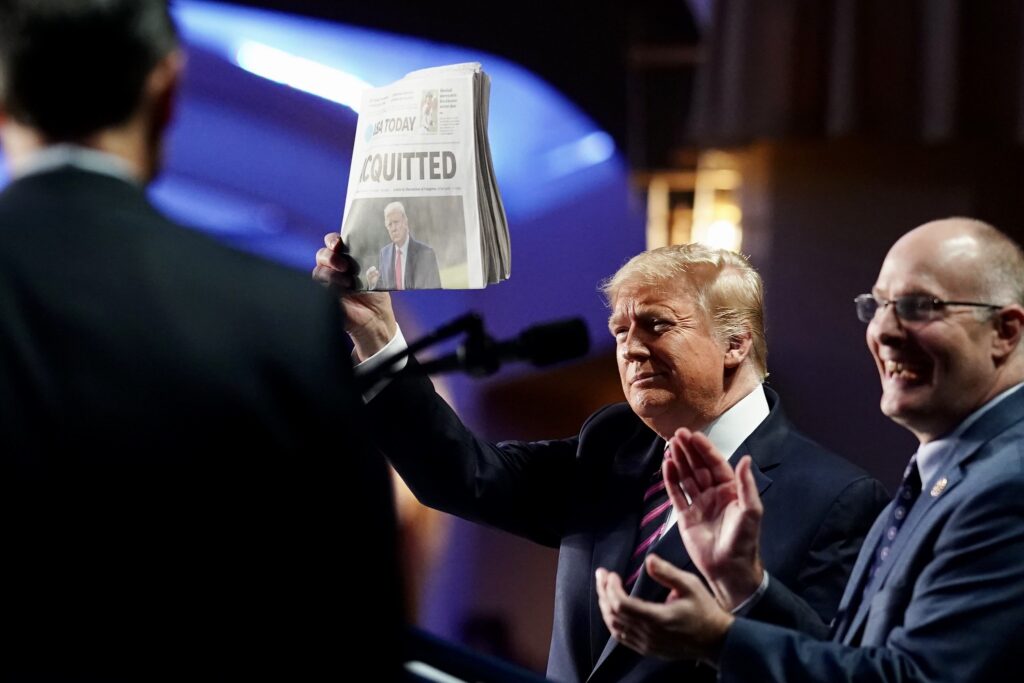 For my July column at The Conversationalist, I began exploring the failures of what I call “respectable” evangelicalism—that is, the kind that is associated with a prestigious professional pedigree of some sort and an investment in civility politics. The members of this conservative Christian subculture have established a friendly-seeming presence across prominent liberal media outlets, from the major network television news broadcasts to The New York Times and the Washington Post. Because they have easy and regular access to these platforms, PR-savvy commentators from within the conservative Christian community can claim that their fellow white evangelicals are an unfairly maligned and misunderstood demographic, sincerely motivated by moral convictions about abortion and a fear of losing their “religious freedom.” Liberals, in other words, should empathize with them.

This framing, which has contributed mightily to the normalization of extremism, still dominates the American discourse. But the majority of white evangelicals are ostentatiously enthusiastic for Donald Trump; their unwavering support for the president is accompanied by a remarkable statistical about-face on the question of whether a leader’s immoral private life can coexist with an ethical public and professional life, a fact that has certainly thrown a wrench in the gears of the evangelical PR machine.

Respectable evangelicals are losing their ability to control the narrative, which is an important development that I will examine in next month’s column. This month, the subject is the failure of respectable evangelicals to accept responsibility for the harm they have done to our society and our polity. Theirs is an ethical failure; it reveals the rot at the very center of the conservative evangelical project over the last half century.

In my previous column I examined the ways in which evangelical public figures, particularly Michael Gerson and Peter Wehner, have failed to convince their coreligionists that unwavering loyalty to Donald Trump reflects poorly on evangelicalism. Wehner’s career as a GOP operative goes back to the Reagan administration, a connection of which he remains proud. Despite the hagiographic image the media has built of President Reagan, he was in many ways a proto-Trump. Reagan was catapulted to power in part thanks to the efforts of a then newly surging Christian Right, whose foot soldiers were moved by his anti-government rhetoric and projection of “cowboy” masculinity.

During the 1980 presidential campaign Reagan even used the slogan “let’s make America great again.” It was that election that set the United States on its trajectory toward Trumpism. Perhaps there is no better symbol of what Reaganite conservativism always was than the popular Soviet defector and Cold War comedian, Yakov Smirnoff, who, at the peak of the COVID-19 pandemic, opposed a mandatory mask policy in his adopted hometown of Branson, Missouri. The town is a sort of geriatric evangelical Las Vegas—at least in terms of the entertainment it offers to tourists, if not so much the libertinism. “What a country,” indeed.

Gerson acknowledged in an April 2018 article for The Atlantic that evangelical Trump supporters “have associated the Christian faith with racism and nativism,” but in the same piece he disingenuously implied that the nineteenth-century history of evangelicalism lies entirely in the abolitionist movement. In fact today’s white evangelicalism is much more a descendant of slaveholder Christianity, which claimed to have found its justification for human bondage in the Bible.

Gerson has not, as far as I know, ever expressed regret for his work in the George W. Bush administration, the politics of which—his politics—helped pave the way for the rise of Trump. The disastrous Iraq war boosted paranoia in the United States; its legacy is a climate of permanent fear, the flames of which the GOP fanned briskly after 9/11. The path from “truthiness” to post-truth is short. But please, sir, continue to wring your hands about how alienated “religious voters” are by Kamala Harris’s record on abortion while the country burns, in large part thanks to a movement you helped build.

Around the same time I was writing about Gerson and Wehner, I published related analysis in Religion Dispatches focusing on the failure of evangelical commentators David French and Ed Stetzer to dissuade rank-and-file white evangelicals from embracing conspiracy theories and spreading disinformation. The almost desperate tone of French and especially Stetzer in their commentary belies, perhaps, a sense at least of embarrassment, if not guilt, about how far into the post-truth wilderness their coreligionists have proven willing to go. What I do not see from them, or other similar commentators, is any serious attempt at self-reflection on the role they played in creating this state of affairs.

Stetzer scolds his fellow evangelicals for their “gullibility,” but not for their paranoid “mistrust of media and government.” According to Stetzer, all evangelicals need is a little more “discernment,” a perfectly vague concept he does little to fill with specific applicable content. He also invokes the Ninth Commandment’s injunction against bearing false witness and worries that the evangelical “witness” is being harmed, a tack that will fail to get results for reasons I explored in last month’s column. Meanwhile, French unconvincingly proffers his own supposed solution to the issue of evangelicals embracing QAnon and Bill Gates nonsense. If evangelical churches were simply to preach a better “political theology,” he maintains, one predicated on a robust understanding of the Ninth Commandment, the issue would be resolved.Clearly, neither man is willing to dig down to the roots of the problem—namely, the conservative evangelical theology that, as scholars in religious studies and sociology have demonstrated, was developed within, and with the purpose of justifying, an unjust hierarchical social order. Although many evangelicals with pretensions to respectability would deny they are racist, conservative evangelical thinking places men above women, white people above racial minorities, and straight people above LGBTQ people; it also emphasizes absolute parental authority over children and prescribes corporal punishment.

In other words, white evangelical subculture is a perfect recipe for authoritarianism. This is reflected in the many revelations, in recent years, of a culture of sexual misconduct and coverups.

Stetzer holds a prominent position at Wheaton College, an evangelical institution that made headlines in recent years for firing a woman hired to “support” LGBTQ students, essentially because she turned out to be “too gay,” and for ousting the only tenured African-American woman in the history of the school for the manner in which she chose to express solidarity with Muslims at a time of surging Islamophobia and anti-Muslim hate crimes. Evangelical colleges such as Wheaton depend on right-wing parents and donors who make sure the schools enforce social conservative orthodoxy, even if, quietly, some professors teach “controversial” subjects, such as evolution, psychology, and even human sexuality more or less responsibly—though always at the risk of becoming too visible and thus being purged.

These colleges depend on K-12 Christian schools feeding into them, which brings us back to French, who has a record of staunchly defending them, despite the fact that they discriminate against LGBTQ students, faculty, and staff. They also teach the sort of “alternative facts” that constitute, ahem, false witness. Be that as it may, French proudly notes that he sent his own children to a Christian school, where he served as chairman of the board. As openly queer Florida State Representative Carlos Guillermo Smith (D-Orlando) noted in a recent webinar hosted by Secular Democrats of America, at least 83 Christian schools in Florida that receive taxpayer funding through vouchers have policies in writing that they will expel openly gay or trans students. Typically, such schools also teach young earth creationism and a version of history distorted by Christian nationalism. Is it any wonder that many children socialized in these schools—as I was, by the way—emerge ready to embrace conspiracy theories?

The refusal of elite evangelicals to accept any responsibility for the harm they have done by encouraging and pursuing the Christian Right’s culture wars agenda reveals the rot at the core of the entire conservative evangelical project over the last half century.

The consequences of culture warring include paving the way for the rise of President Trump, whom #NeverTrump evangelicals now seek to scapegoat due to his penchant for saying the quiet part of their ideology out loud. But they are also much broader, affecting everything from the problems of LGBTQ youth homelessness and suicide, to our country’s failures to address urgent problems in the areas of climate change and public health, to our lack of regard, as the only United Nations member state not to have ratified the UN Convention on the Rights of the Child, for children’s rights to a robust education and to freedom from abuse and neglect.

America’s respectable evangelicals, still upheld by establishment media as commentators who deserve to be taken seriously, will not have any sort of “come to Jesus” moment over the harm they have done. If, however, enough Americans demand that those of us who have suffered that harm in various ways should be treated as stakeholders in the relevant discussions, it might be possible to compel them to face uncomfortable realities. In any case, sustained public pressure over their lack of accountability will likely be necessary if the United States is to have a healthy democratic future.

During the 1980 presidential campaign Reagan even used the slogan “let’s make America great again.” It was that election that set the United States on its trajectory toward Trumpism.