When Trump appointee Neil Gorsuch was confirmed to the Supreme Court, the Christian Right celebrated. Now they’re wondering if they’ve been betrayed. 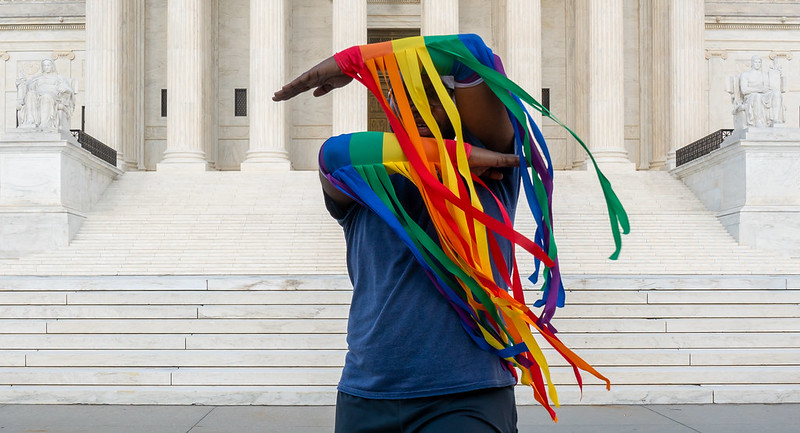 On June 15 the Supreme Court of the United States handed down a landmark decision in Bostock v. Clayton County, Georgia, ruling that Title VII of the Civil Rights Act of 1964, which prohibits employment discrimination “on the basis of sex,” extends to sexuality, gender identity, and gender expression. Justice Neil Gorsuch, a young Trump appointee with a solid conservative background, wrote the 6-3 decision—leaving many right-wing Christians feeling betrayed and outraged.

“Bostock is as bad as you think,” reads the headline of one take published on June 19 in conservative evangelical magazine Christianity Today. The New York Times reported that Franklin Graham, president of the Billy Graham Evangelistic Association, called June 15 “a sad day” and worried that the decision would “make it harder to defend our religious freedom, as far as being able to hire people of like mind.”

Readers will remember that Gorsuch filled the vacancy left by arch-conservative Justice Antonin Scalia, who died toward the end of Obama’s second term. Senate Majority Leader Mitch McConnell made the unprecedented move of refusing to hold senate confirmation hearings for Judge Merrick Garland, the candidate named by President Obama. McConnell insisted instead on leaving the seat vacant until after the 2016 presidential election. The dubious Gorsuch appointment, in other words, was seen as a major victory for conservative Christians and Republicans.

What are we to make of Gorsuch’s seeming “defection,” and what are the implications of the SCOTUS decision for the 2020 election?

The U.S. Christian Right’s primary strategy to gain and maintain theocratic control over other Americans is to weaponize the concept of religious freedom. Andrew Seidel, a constitutional attorney who is Director of Strategic Response at the Freedom from Religion Foundation, explained that “the end goal is to make conservative Christians and Christian nationalists a special, favored class.”

In other words, the Christian Right wants the “right” to discriminate against anyone whose lifestyle or professed views conflict with white evangelical Christian thought. According to this view, a pastry chef can refuse a commission to bake a wedding cake for a same-sex couple because gay marriage conflicts with his religious beliefs; or an employer can refuse to cover contraception in their health coverage. Similarly, a pharmacist can refuse to sell a woman the morning after pill because his religious belief holds that life begins at conception.

In a sort of bait and switch, evangelical Protestants, traditionalist Catholics, and Mormons have, with significant success, attempted to replace a pluralistic understanding of religious liberty that is essentially in keeping with the vision of America’s founders, with a revisionist, Christian nationalist definition of religious freedom as the “right” of conservative Christians to dominate in the public square. This push has come along with the ascendance of a hypermasculine, patriarchal strain of evangelicalism that culminated in white evangelicals’ embrace of, and enduring loyalty to, President Donald Trump.

The point is neatly illustrated in another recent article from Christianity Today, in which evangelical political scientist Daniel Bennett argues in the wake of Bostock that all is not in fact lost for religious liberty, while positing a fundamental “conflict between LGBT rights and religious freedom rights.” Bennett’s conservative Christian framing shows that he (like most of his coreligionists) thinks of religious freedom as a zero-sum game. In the context of pluralistic democracy, however, religious freedom should be understood as a fundamental area in which to ensure equal accommodation in the public square. Bennett, of course, ignores the existence of LGBTQ Christians and straight Christian allies. To approach religious freedom democratically means to see it as intertwined with, and complementary to, LGBTQ rights, rather than pitting the two against each other.

There is legal precedent for a pluralistic conception of religious liberty. Frederick Clarkson, a vocal advocate for the liberal reclamation of religious freedom, points to the 2014 case General Synod of the United Church of Christ v. Cooper in arguing the point. In that case, a federal judge ruled in favor of progressive Christian clergy who had been barred by North Carolina state law from solemnizing same-sex marriages—despite their religious conviction that they should do so.

There are other legal precedents that could be used by right-wing Christians to support their definition of religious freedom. The 2012 Supreme Court case Hosanna-Tabor Evangelical Lutheran Church and School v. Employment Opportunity Division exempts religious institutions from anti-discrimination laws if the employee affected can be considered a religious minister. However, the case left much ambiguity around the definition of “minister,” and thus the “ministerial exception” is likely to be the site of future litigation.

Meanwhile, the Christian Right has managed to expand religious exemptions in other recent cases: in the 2014 case Burwell v. Hobby Lobby Stores, Inc., for example, the Supreme Court ruled that a closely held corporation could be exempt from the Affordable Care Act’s contraception coverage requirement if adhering to that requirement would constitute a violation of the owners’ sincerely held religious beliefs.

These precedents in favor of religious exemptions did not stop arch-reactionary Rod Dreher, an adult convert to the Orthodox Church in America and senior editor at The American Conservative, from tweeting his alarm about the supposed threat posed by Bostock to churches’ tax exempt status. “Thanks to two GOP appointees—Roberts and Gorsuch,” Dreher tweeted, “churches and schools that discriminate against LGBTs stand at risk of losing tax-exempt status, per the Bob Jones ruling. Hard to overstate the magnitude of this loss for religious conservatives.”

Thanks to two GOP appointees — Roberts and Gorsuch — churches and schools that discriminate against LGBTs stand at risk of losing tax-exempt status, per the Bob Jones ruling. Hard to overstate the magnitude of this loss for religious conservatives.

But GOP operative Ralph Reed, an evangelical political organizer and lobbyist with a long history of fighting for socially conservative causes, sought to downplay the significance of LGBTQ rights victories to the Christian Right. Per the Washington Post, he said: “Religious freedom and abortion just rise far higher in the hierarchy of concerns of faith-based voters.” He even went so far as to state, “Ultimately seeing a reckoning on Roe vs. Wade looms so much larger in the psyche of the right that I don’t know that this is a de-motivator.”

We need not take either man’s claims at face value, as both are heavily interested parties and old hands at spin. But the overturning of Roe, which would do immense harm to women’s rights and public health, is well within the realm of possibility. Given the importance white evangelicals place on ending legal access to abortion, Democrats should assume high white evangelical turnout to vote for Trump in 2020. Nor can we be sure that Bostock means LGBTQ protections will be safe from further court challenges by right-wing Christians.

Imani Gandy, Senior Legal Analyst at Rewire.News, dismissed Dreher’s alarmist handwringing, saying she did not believe conservatives had “anything to worry about when it comes to losing tax exempt status.” She added, “Roberts expressly left open the question of whether or not the First Amendment or RFRA would permit discrimination against LGBT people if that discrimination is couched as a religious belief.”

Seidel agreed with Gandy, adding that we can expect to see further attempts to undermine the separation of church and state via legal battles over religious exemptions.

“That fight is coming to the court very soon, and I doubt we’ll be able to rely on Gorsuch and Roberts to do the right thing. In fact, I think that inevitable future question is part of the reason Gorsuch wrote such a clear opinion. No doubt that the text of the Civil Rights Act demanded this decision, but misguided and weaponized notions of religious freedom will allow the conservatives to walk back some of these gains later.”

Andrew L. Whitehead, coauthor with Samuel L. Perry of Taking America Back for God: Christian Nationalism in the United States, suggested that there is some truth to Ralph Reed’s claim that LGBTQ rights are not as urgent a concern for the Christian Right as they used to be. Public opinion has shifted on the issue, he said, pointing out that even “those Americans who most strongly embrace Christian nationalism have liberalized significantly. In 2007, 7 percent [of them] supported same sex marriage. In 2017, 25 percent did.”

Seidel was not so sanguine. As authoritarian Christians have framed it, “religious freedom” entails the “right” to discriminate against members of the LGBTQ community in as many areas as possible. “If they are able to convince this Supreme Court that the First Amendment guarantees a right for a religious believer to act on their belief, regardless of the law, they will have won,” said Seidel. He added: “It’s no wonder Reed cares more about that fight than the others. If they can redefine religious freedom—weaponize religious freedom—they will have a right that guarantees them substantial wins in every other fight.”

If America is to achieve a functional democratic future, the public must embrace a liberal vision of pluralism and reject the idea that religious freedom, properly understood, could ever be in conflict with the promise of equal rights for all.

Conservative Justice Neil Gorsuch, a Trump appointee, surprised liberals and dismayed conservatives in agreeing with the majority of the Supreme Court that employers may not discriminate against LGBTQ people. 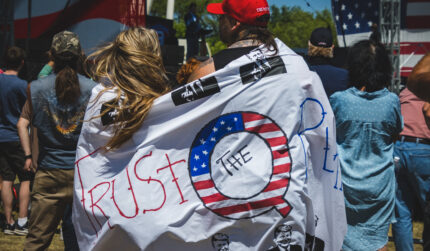 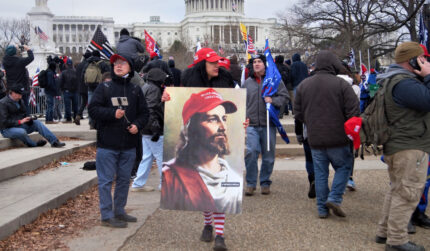