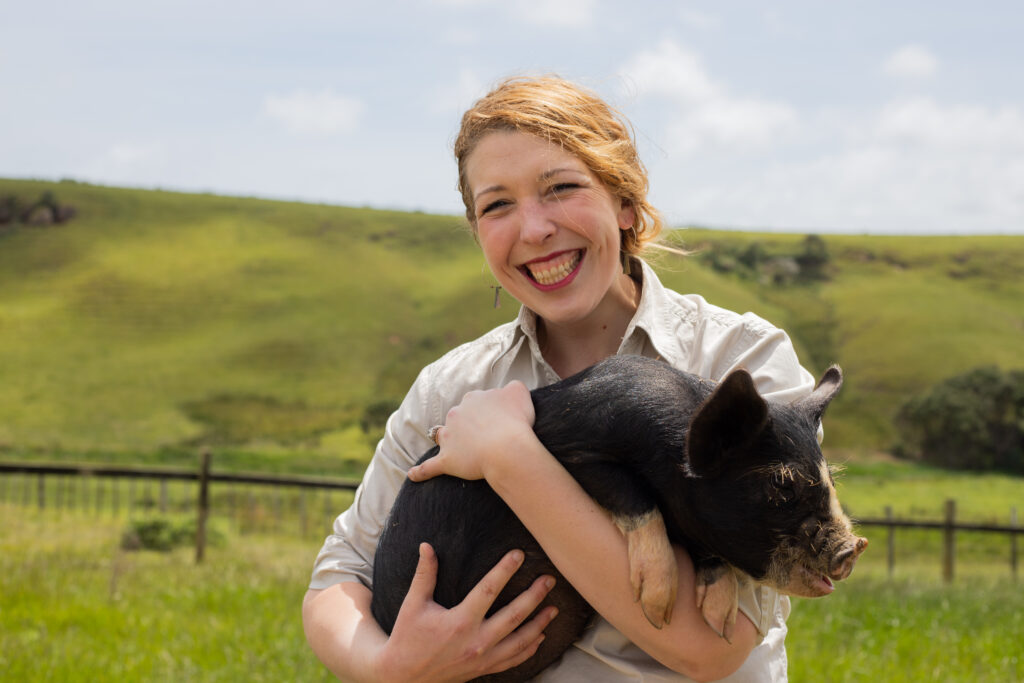 Picture a butcher and what do you see?

Perhaps a burly mustachioed man swinging a meat cleaver into a carcass. Hacking away, smeared in blood, working in a quick and inelegant fashion. Heaving body parts up onto his thick shoulder and then slamming them down onto a cutting table.

That out of date image persists but at a New Zealand company, aptly named “A Lady Butcher,” owner Hannah Miller does things quite differently. First of all, there’s no music blaring and no loud power tools or machinery running. In fact, it’s rather quiet—Zen-like, even.

Miller, originally from Portland, Oregon, practices a type of butchery called seam cutting. It’s careful, precise work where every part of the animal is used. Miller describes this nose to tail work as “mindful” and finds it peaceful.

“When it’s just you and a knife you have to pay attention to what you’re doing. The seams and the muscles tell you what to do, it’s very obvious where to cut. You can’t be joking around and having a laugh and singing to music because you’ll miss it, you’ll miss the intricacies and the detail of that style of butchery, it’s that mindful practice, I call it the Zen of butchery,” she says.

Before learning to butcher in London, Miller was a culinary student in New York. After a lecture delivered by world-famous chefs Anthony Bourdain and Fergus Henderson, she was inspired to make the move to the United Kingdom and found that butchery and cooking go hand in hand.

“They’re completely intertwined, I don’t think you can have one without the other,” she says.

The more butchers understand about the restaurant industry the better they can respond to operational matters like creating workarounds to offer little-used cuts of meat to prevent waste. For instance, when a trend for lamb rumps meant that restaurants might require dozens of lambs a week but were only using one part of the animal for their signature dish.

Practically sharing information and skills also means that butchers can better educate customers on the cuts of meat they need to create the recipe they have in mind. Miller says she would challenge butchers to go home and cook a particular cut and then have them share their experience with the crew the next day.

Before settling in New Zealand, Miller had traveled all over the world always finding that butchers were in short supply. When she landed in New Zealand at dawn, she had her first interview and had secured a job by lunchtime.

Despite New Zealand traditionally having a meat-heavy diet, with dinner often called “meat and three veg,” Miller was surprised to discover that the majority of cured meats in New Zealand were imported.

Sharing meat education continues to be one of the most important parts of Miller’s business philosophy. She gives workshops to chefs in restaurants in Auckland, teaching them how to prepare different cuts to serve in order to use the animal economically. This is a better way for the restaurant to maximize profits and introduce customers to new cuts, but it also serves to reinforce her commitment to less wasteful meat production.

“We’ve chosen to take an animal for our own nourishment, so absolutely nothing can go to waste. I make sure the bones are perfectly clean, that everything’s trimmed properly, part of the whole process is being in the moment, but also ultimately it’s about respecting the animal,” she says.

She has also spread that message of education by offering workshops to chefs and in April when her new restaurant, Churly’s Brew Pub & Eatery, opens members of the public will be able to sign up for butchery classes too. This new venture will be a leader in nose to tail restaurants, changing the menu up regularly, sometimes even during service, to ensure all meat cuts are utilized and that nothing goes to waste.

From a 90-kilo animal, Miller says only about 150g should be thrown away. But she says to do this you really need to focus. “You can use absolutely everything, but you need to pay attention. When I teach butchery, I set out the rules and, safety is first, second is nothing, absolutely nothing goes in the bin unless I put it there.”

She says that the skill of the butcher determines much of the waste. Trimming fat from muscles meticulously results in a much higher yield of usable meat. She then renders down all the fat and bones for broths and even dehydrates sinew to make dog treats. Lately, she has also been giving away bones and skulls for people to decorate.

Her message of sustainability may at first glance seem to be at odds with her job. After all, veganism is often touted as the cure for much of the earth’s problems. I asked her if she ever thinks about the impact of meat production on the planet and she said it’s something that she considers daily.

“It’s not really so much about eating meat or not eating meat, it’s about eating local, and seasonally. You don’t need to eat a tomato in December, if you live in the northern hemisphere,” she says.

Her remedy is that we all need to eat better quality meat from farmers that we know and trust, returning to a time before supermarkets and discount stores disrupted the relationship consumers had with the people who produced their food.

“Eat meat, but eat less of it, eat a better-quality meat. My husband and I eat meat most days. This week we had beautiful sausages, on the barbecue, I know the farm it came from and we had one sausage and then the rest of the plate was full of cauliflower salad and beautiful guac because right now we have tons of avocados.  We should first be eating local, and secondly, eating better but less.”

Developing a relationship with your local farm is an important step in becoming a more conscious food consumer, as I discovered when I first met Miller at the Taurapa Station in Napier, on New Zealand’s North Island. She gave a butchery demonstration using lamb from Atkins Ranch, who raise 100 percent grass-fed animals that wander and graze over beautiful pasture lands; it’s about as idyllic as farming can be.

In that way, New Zealand which is often described as 18 hours ahead and 20 years behind the rest of the world, really is a pioneer. Miller explained to me that the resurgence of interest in local foods and the proliferation of trendy farmers’ markets seen in the United States has always been part of the food culture in New Zealand.

Sustainability goes further for Miller though, it’s an entire way of life where she aims for balance. “We say regeneration instead of sustainability. Because regeneration is the idea of giving back. So, you’re not just taking you actually make sure that this circle is completed. Think about it as a circle, instead of an A-Z,” she says.

Miller knows her customers care about where their meat comes from and how it was raised. At her new restaurant and pub, Churly’s, opening in Auckland, she’ll continue this education.

The restaurant takes its name from a popular kiwi expression. “Chur” can mean thank you, cool, OK, and a range of other expressions. It’s also the name of the mascot at her husband, Andrew Child’s, brewery Behemoth Brewing Company, which is a big part of the new brand.

To help with her increased workload, Miller has just taken on an assistant, another lady butcher, who sent her a message on Instagram asking to be mentored.

“I love that the people approaching me to come work for me and to learn and to invest their time are women. These women that I’ve  worked with have said how empowered they feel, they’re just so excited and they have that feeling that they can take on the world and it just fills me with so much pride. I will definitely teach anyone and have a great time with it but there’s something special about being a lady butcher,” she says. 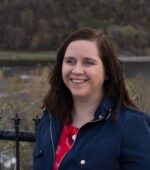 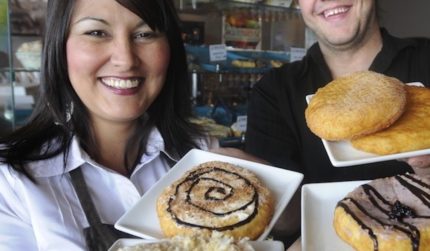