There is a tendency to present the Mitfords as Nancy did: as eccentric and therefore unthreatening aristocrats. 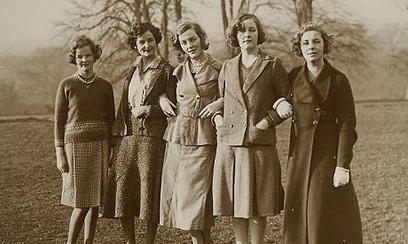 Britain is ever wreathed in class and class obsession. Now, there is another adaptation of The Pursuit of Love, Nancy Mitford’s wildly popular 1945 novel about an eccentric, country-dwelling aristocratic family with an overbearing father, an exasperated mother, six sisters, and one brother. Essentially, it is a sanitized portrait of Mitford’s own interwar upbringing at Asthall Manor in Oxfordshire.

The three-part adaptation is directed by Emily Mortimer, was broadcast on the BBC in May, and will stream on Amazon from July 30. Lily James (Lady Rose Aldridge in Downton Abbey) is Linda Radlett and Andrew Scott (the “hot” priest in Fleabag) is the whimsical Lord Merlin. Reviews have been positive to ecstatic (“fantastically enjoyable”; “absolutely glorious”; and “quite profound”). Critics have noted that this adaptation targets the Bridgerton generation with modern interpretations; but the coverage has declined to focus on the Nazism of the most notorious Mitford sisters, Diana and Unity, and the politics of their brother Tom, who died fighting the Japanese in the Pacific theatre because he could not bring himself to fight Germans.

Nancy Mitford performs an enchantment with her pen: She combines her sisters into one dazzling Romantic heroine, Linda Radlett. Linda is a benign composite, with elements borrowed from each sister (except Unity, the Nazi, who was incapacitated by 1945, having shot herself in the head when war broke out. Unity is singular). 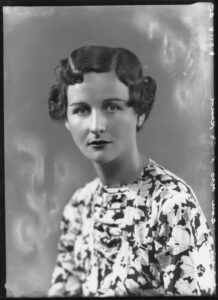 Linda abandons her first husband: that is Diana, who left her own husband to marry Sir Oswald Mosley, the leader of Britain’s tiny smudge of fascists. She falls in love with a communist: Jessica. Then a Frenchman: Nancy. She is superficially kind: Deborah.

Linda is that mercurial thing: charming. Charm is the ability to seduce people against their better instincts. She is a feather in the wind. Such people do not take responsibility. They do not have to. The Pursuit of Love is essentially redemptive: for the Mitfords and for the aristocracy. It is the founding document of the Mitford cult—without it, there would be no cult—and it is self-serving. They only pursued love, after all—who doesn’t? In response, I can only purse my lips and say: Nazis?

The truth of their fascism—Diana was Mosley’s lover and helpmeet and Unity stalked and worshipped Hitler—is more repulsive than mere viewers of The Pursuit of Love can know. There is, for instance, no scene in the novel or TV adaptation in which Unity, living in Germany, boasts that her home is a flat belonging to Jews. Which Jews, and where are they now? (It would have made a better novel than Linda shtupping a boring Communist, but Nancy was writing absolution, and the family appreciated it. On reading it, Lord Redesdale wept with happiness.)

There are many examples. “Everyone should know I am a Jew hater,” wrote Unity to the Nazi newspaper Der Stürmer, in case mere speech was not loud enough. As late as the 1980s, Diana was blaming global Jewry for the Holocaust. If they had stepped in and saved German Jews from the consequences of their own evil—by resettling them, she suggests—it might not have happened. Consider the 1938 Evian Conference, at which the assembled representatives of 32 countries expressed their regrets at being unable to provide refuge for the Jews of Germany and Austria. Apparently she missed it.

There is a tendency to present the Mitfords as Nancy did: as eccentric and therefore unthreatening aristocrats whose attachment to murderous tyranny in life was no more significant than their clothing, their manners, or their speech. They were young and they succumbed to the jackboot: that is, the line. (Unlucky, that’s all. Poor Lady Redesdale.) It is convenient—it defends the wider aristocracy from accusations of racism, of hating democracy—and it is unjust. That Unity failed to kill herself when war broke out—she lived for nine years with a bullet in her skull—does not forgive the bullets she wished on others, if they were Jews. She was once found in the garden of a friend, practising shooting for the day she could legally kill Jews. (She was a terrible shot. When she shot herself, she missed.) In England, she is only remembered as a bit odd. 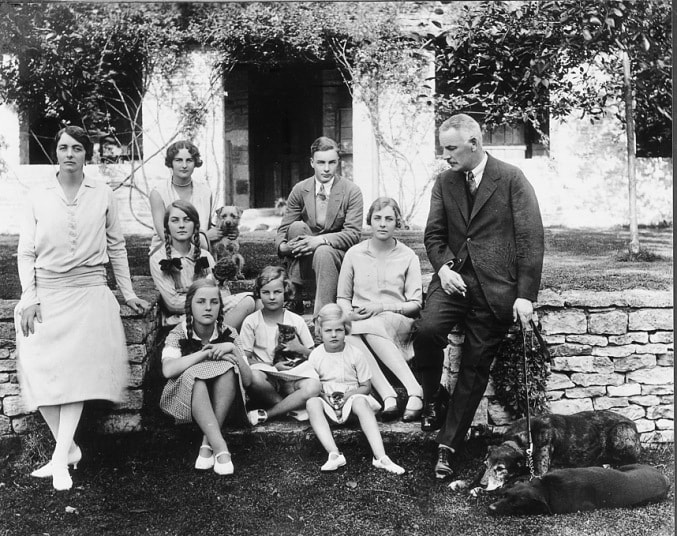 I think that, in retrospect, their vernacular absolved them. It makes them sound unserious; gossip columnists near tyrants, and amateurs at that. For this I blame Noël Coward and Enid Blyton. We are so used to hearing the cadence and idioms of English as it was spoken in the light comedies and children’s stories of the 1930s, that it is easy to laugh at Diana’s defence of Julius Streicher, which Jessica, the sister who married a Communist, moved to America and became a civil rights activist, related in her memoir Hons and Rebels: “‘But darling!’ Diana drawled, opening her vast blue eyes, ‘Streicher is a kitten!’”

It is equally easy to laugh at Unity’s typical sign-off in letters from Munich, where she went to accost Hitler: “best love and Heil Hitler! Bobo.” (They all had nicknames. Nancy called Jessica, the Communist, “Squalor.”) Then there is Unity’s unique interpretation of Nazi in-fighting: “It must have been so dreadful for Hitler when he arrested Röhm himself & tore off his decorations. POOR HITLER.” (The caps are hers.) You may laugh, but she meant it. Or Diana’s moronic observation: “His [Hitler’s] hands were white and well-shaped.” Or Diana’s other moronic observation: “I never once saw him [Hitler] eat a cake of any sort.” It’s not a profound thing to meet Hitler, if that is what you come away with. Diana wrote and so, writer to writer: Thank God you had a private income too.

The only possible defence for these Mitford sisters is a feminist defence: They did not, due to an upbringing in which they were chaperoned as fiercely as they were unschooled, know how to manage lust. (In The Pursuit of Love the narrator, Fanny, is properly educated. I can hear Nancy’s envy in the prose.) Today they would be described as “radicalized.” Nanny Blor—aristocratic children were raised by nannies and governesses—was wise about her ungovernable charges. She cautioned against Unity’s involvement with Mosley’s British Union of Fascists: “All those men!” she said, and she would know—though Unity was at this point, in Mel Brooks’ phrase, only playing ping-pong with the balls. When Jessica ran away with a Communist Blor wailed, “Jessica has only taken two pairs of knickers & they are both too small for her & I’m afraid they will burst.” Too late, Nanny Blor. Too late. 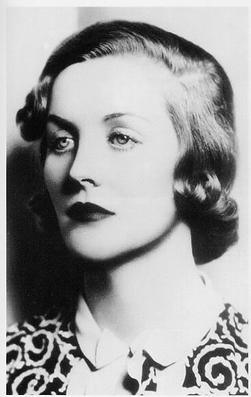 Diana does not write about her physical passion for Oswald Mosley, but it is made obvious by what she gave up for it. She left a rich, loving husband—Bryan Guinness— to be Mosley’s mistress, only marrying him after his wife died (of peritonitis or heartbreak, depending on who is telling). Diana not only ruined her reputation for Oswald; she was also interned for three years as a fascist sympathizer during the Second World War. She could never admit to need (six siblings and stubbornness prohibit it) and was never short of words—she posed quite successfully as a pseudo-intellectual, mostly on the basis of possessing books—but on her passion for Mosley she only said: “He was completely sure of himself and of his ideas.” Conviction was not something her father, Lord Redesdale, who raged and squandered his fortune, ever had.

Redesdale was self-hating. His older brother Clement was killed in the First World War, and he was the remnants: a disappointing younger brother in competition with a ghost. In response he destroyed the great fortune that shamed him, which is now a few cottages, a pub, and a snack bar. (He was also likely a manic depressive. But if aristocrats had family therapy the history of Great Britain would be a different tale.) So that was that: Diana settled into Mosley’s iron fist like a pretty bird. She called him “The Leader”; by the end she was almost the only follower. Having read almost everything about Diana, I wonder if her fascism was both convenient and retrospective. Because the best and worst thing I can say about Diana Mosley is that she isn’t a convincing fascist. She was trivial and flinty; she was skin deep. She said in old age, “I don’t mind in the least what people’s politics are.”

Her family say she never changed her views: Were these, then, her views? I believe it because she was no intellectual—we are back to Hitler’s dietary imperatives and beautiful hands—and, after she was imprisoned with Mosley during the war for national security, how could she perform a retreat, admit a wrong? Diana destroyed herself for lust, and so trapped herself. It is a fair fate for someone so visual.

Unity (middle name Valkyrie), who was conceived in a small town in northern Ontario called Swastika—which still exists—is more horrifying. She went to Munich in 1932 to stalk Hitler. She hung round at Nazi party offices and lurked in his favourite restaurant—the Osteria Bavaria—with the confidence of the British aristocrat with golden hair. He considered her a lucky charm—she was related to Winston Churchill by marriage—but it consumed her. You know how stupid some people sound on Twitter? Unity wrote like that on paper. “It was all so thrilling,” she writes of one encounter with Adolf, “I can still hardly believe it. When he went, he gave me a special salute all to myself.” She would stand on street corners to “waggle a flag” at him.

It was not abnormal for women to react to him like that. One account reads, “Women by the thousand abased themselves at Hitler’s feet, they tried to kiss his boots, and some of them succeeded, even to the point of swallowing the gravel on which he had trod.” I hope that is apocryphal. 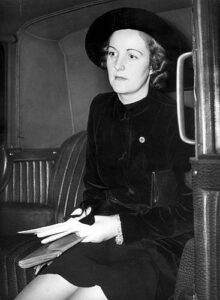 One biography has Unity having formal orgies—she was English, after all—with SS officers under Swastikas and relating the details to Adolf at his request. I’m not sure that I believe that—though with Unity anything is possible, and she did sunbathe nude in the Englischer Garten in Munich—but family accounts refer to shaking, sighing, and trembling in HIS presence. She especially thrilled to his rage: “He got angrier & angrier,” she wrote to Diana, “& at last thundered— you know how he can— like a machine-gun—‘Das nächste Mai, dass die Richter so einen Mann freilassen, so lasse ich ihn von meiner Leibstandarte verhaften und ins Konzentrationslager schicken; und dann werden wir sehen, welches am stärksten ist, the letter of Herr Gürtner’s law oder MEINE MASCHINEN GEWEHRE!’” (Essentially, he is threatening someone with imprisonment in a concentration camp and death by a machine gun held by someone else. Those beautiful hands were technically clean.) Her gasping payoff is—and you can hear the throbbing lust on the page— “It was wonderful.”

Can a bucolic English childhood make you crave that much anger, if you are a victim of home schooling? I’m glad some people enjoyed tourism in Nazi Germany, but I wonder if Nancy’s title is quite right. It is better called The Pursuit of Rage.

The truth of their fascism—Diana was Mosley’s lover and helpmeet and Unity stalked and worshipped Hitler—is more repulsive than mere viewers of 'The Pursuit of Love' can know. 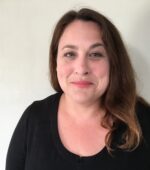 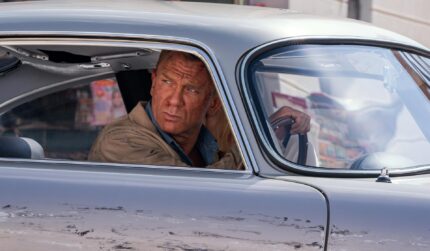 The feminist debate about James Bond is a marketing strategy