Belarusians have found a unifying crucible in their resistance to state violence. 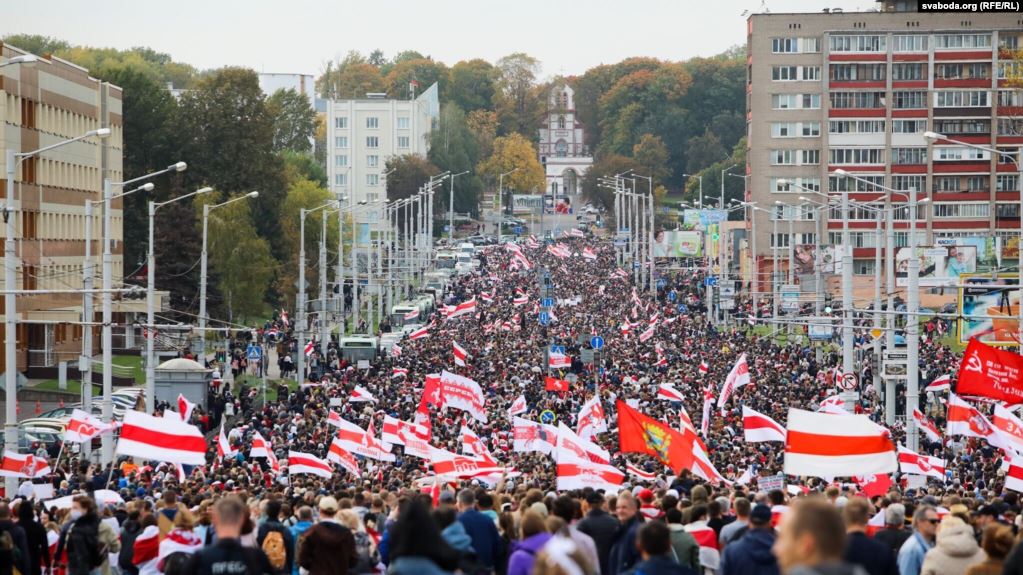 Credit: Svaboda.org (RFE/RL)March for the release of political prisoners in Minsk on October 4, 2020.

Mass demonstrations erupted in Belarus on August 9 to protest what was widely viewed as a rigged election that gave long-time strongman Alexander Lukashenko, who has ruled Belarus for 26-years, a victory over the popular incumbent. The protests have continued on a daily basis for nearly two months, despite mass arrests, beatings, and torture. The largest civil society movement in Belarus’s history is shaping the future of this former Soviet bloc country.

Mikita Mikado, 34 years old, is the CEO of PandaDoc, a California-based software company. From his office in San Francisco, he is following the news from his home country of Belarus. In the midst of the nationwide protests over the result of the presidential election and a crackdown of unprecedented force, he stepped in and urged police officers to resign. Money? “We can solve it,” he promised.

Never before, Mikado said, had he felt like standing up against Alexander Lukashenko, the authoritarian leader who has been president of Belarus since 1994. The breaking point was when he watched in horror as his fellow countrymen were dragged away and beaten up by riot police.

“I knew someone who was tortured and beaten,” he said. “I could no longer stay silent and do nothing, when stun grenades were exploding on the streets.”

Mikado’s crowdfunding initiative, Protect Belarus, was successful: over the ensuing three weeks it raised money to financially support police officers who quit their jobs. Hundreds of security forces members applied for re-training in the technology industry and for financial aid.

For years, Belarus’s rapidly expanding IT industry coexisted with Lukashenko’s government, keeping out of politics while benefiting from preferential tax rates and little regulation. For many tech professionals, the luxury of having a stable and relatively well-paid job allowed them the privilege of not following politics.

That relationship was already changing ahead of the August 9 election. Valery Tsepkalo, a former Belarusian ambassador to the United States and founder of the Hi-Tech Park— the Minsk equivalent of Silicon Valley—joined the opposition. Some startups created apps to monitor vote counts and collect data on poll violations.

Young and savvy engineers, fashion designers and successful entrepreneurs joined the protests. Passivity became just what a country could no longer afford. The middle class that long flourished within the system began separating from it. Post-election violence became the last straw.

Middle class disenchantment with the regime became apparent during the peak of the COVID-19 pandemic. Lukashenko played down the danger posed by the virus and dismissed it as mass “psychosis.” He said it was a minor health issue that could be cured easily with a shot of vodka, or with a day of working on the farm. A mass Victory Day military parade went off as scheduled. Public gatherings were not banned.

Without guidance or policy from the government, Belarusians organised what they called “the people’s quarantine”: either individuals stayed home from work, or businesses introduced work from home policies without official guidance. Lacking support from the government, dozens of local initiatives and crowdfunding efforts emerged to buy and produce medical equipment, sew protective masks and raise financial support from local and diaspora communities.

In Belarus, the pandemic utterly destroyed Lukashenko’s reputation as the controller-in-chief. Despite all his bravado, the president failed spectacularly to contain the virus. More importantly, civil society proved faster, more creative and resourceful than the state. By his very inaction, the president of Belarus unintentionally galvanized ordinary people to take action.

In May, when we spoke about the initiative, Stryzhak told me he hoped the crisis would develop trust in the country’s third sector.

“I see it as gradation from dissidents to parliamentary opposition,” he said. “Even if the dissidents are being trapped, they exist. If there’s less control, they are slowly becoming civil society. Later, alternative candidates appear, after which political parties will be initiated.”

As numerous initiatives and projects exploded since then, he’s emerged from all that’s taken place in recent weeks in a distinctly optimistic mood.

“Alternative structures of society are being created at the moment. These structures, which citizens are forming themselves, will eventually take over the current dysfunctional politics,” Stryzhak says now.

The needle has indeed moved quickly.

A vibrant popular movement has unfolded in the past months in Belarus. More than 100,000 rallied against Lukashenko in Minsk each of the past seven Sundays, despite detentions and police violence, insisting that his landslide re-election in August was falsified.

Unlike in previous elections, the widespread grassroots protests —the largest in the country’s history—are sustained and organized with skillful use of social media. Telegram, a social media app that often remains available even during internet outages, has become a crucial tool in coordinating the unprecedented mass protests that have swept Belarus since the election. Several channels, such as Nexta and Belarus of the Brain, have become the most popular and main tools to facilitate the protests. The crowds are coming from all walks of life. In addition to the middle class, popular public figures are joining the protests.

Among the celebrity protesters are athletes and Olympic medalists who march under the banner of the Free Union of Athletes, a newly-created movement. Nearly 600 Belarusian athletes signed an open letter demanding, among other things, new elections and an end to police violence.

The wave of solidarity and self-organization is unprecedented in this country. Strike committees have been formed at state enterprises across the country, even though police are arresting and fining workers. Students gather on university campuses to protest repression and censorship. Lecturers support them. Media outlets publish blank pages when journalists are detained. Local residents feel the pride in belonging and self-identification; nearly every neighbourhood has its own newly designed flag.

In the largest crowdfunding campaign, Belarusians have raised more than $6 million to help those who suffered from police violence and were fired for political reasons. It is a significant amount in a country where the average salary is roughly $500—and hasn’t increased in the past decade.

The tide of anger and frustration with the Belarusian authorities is longstanding.

People have united in the face of blatant injustice. But why was it this particular election that proved to be the tipping point? “Now it’s different. Belarusians made a sharp leap thanks to the generational change,” says Minsk-based sociologist Alena Artsiomenka. “People who grew up in the post-Perestroika era are more inclined to contribute to the society’s well-being. Those who were brought up in more stable and safe conditions are more interested in post-materialistic values.”

Technology has been essential to the movement’s growth. Crowdfunding platforms made philanthropy easier. But this is no longer considered desirable. The work of one such platform, MolaMola, came to a halt after the government shut it down. It was launched by Lukashenko’s main rival’s son, Eduard Babariko, who has been under arrest since June. The same platform was used to collect money during the pandemic and previously for civil society projects that were not related to politics.

Mikita Mikado felt a desire for revenge, too, after police raided the Minsk office of PandaDoc and arrested four of the company’s managers. The government subsequently blocked the company’s accounts. In order to save his employees in Belarus, Mikado left the project Protect Belarus. But this did not halt the initiative.

The state’s use of violence against protesters has proved to be not only a breakthrough in the way people think about the authorities— and the Belarusian public’s reaction against police brutality— but also in the way they see many realms of day-to-day life.

Belarusians have been moving away from the paternalistic culture that was the tradeoff for economic stability during the post-Soviet period. In recent years, local communities managed to preserve a historic district that was slated for demolition. Residents also protested against the construction of a plant that would pollute their environment. Belarusians have long been associated with a strong paternalistic culture. This began changing in the recent years —people took matters into their own hands.

The 2020 demonstrations are not without precedent. In 2017, ordinary citizens rocked the country with widespread protests against a tax on the unemployed, a bizarre plan that would have forced those who do not officially work to pay a penalty to the state. Injustice was the main driving force for the protests; the same is true of the current protests. In response to the 2017 protests, Lukashenko initially agreed to impose a ban on the tax—only to reintroduce it at a later date. He might not have changed in the intervening years, but the country has. Belarusian society had for years seen the trust of ordinary people in one another drain away. Now it has found a unifying crucible in its resistance to violence. Self-organizing and helping one another became fundamental. A nation’s new, yet old, encounter with its autocratic leader may not be finished yet. But there is little to no chance that Belarusians will submit any longer to Lukashenko’s authoritarian regime.

The widespread grassroots protests —the largest in the country’s history—are organized and sustained with the skillful use of social media. 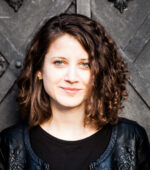 Hanna Liubakova is a freelance journalist and researcher from Belarus. She is a non-resident Atlantic Council fellow and works as a journalism trainer and mentor with Transitions Online Solutions Journalism Programme in CEE. Follow her on Twitter @HannaLiubakova.

Hanna Liubakova is a freelance journalist and researcher from Belarus. She is a non-resident Atlantic Council fellow and works as a journalism trainer and mentor with Transitions Online Solutions Journalism Programme in CEE. Follow her on Twitter @HannaLiubakova.