With just 89 days left before the presidential election, we need more grassroots community-led political spectacle grounded in culture and pluralism. 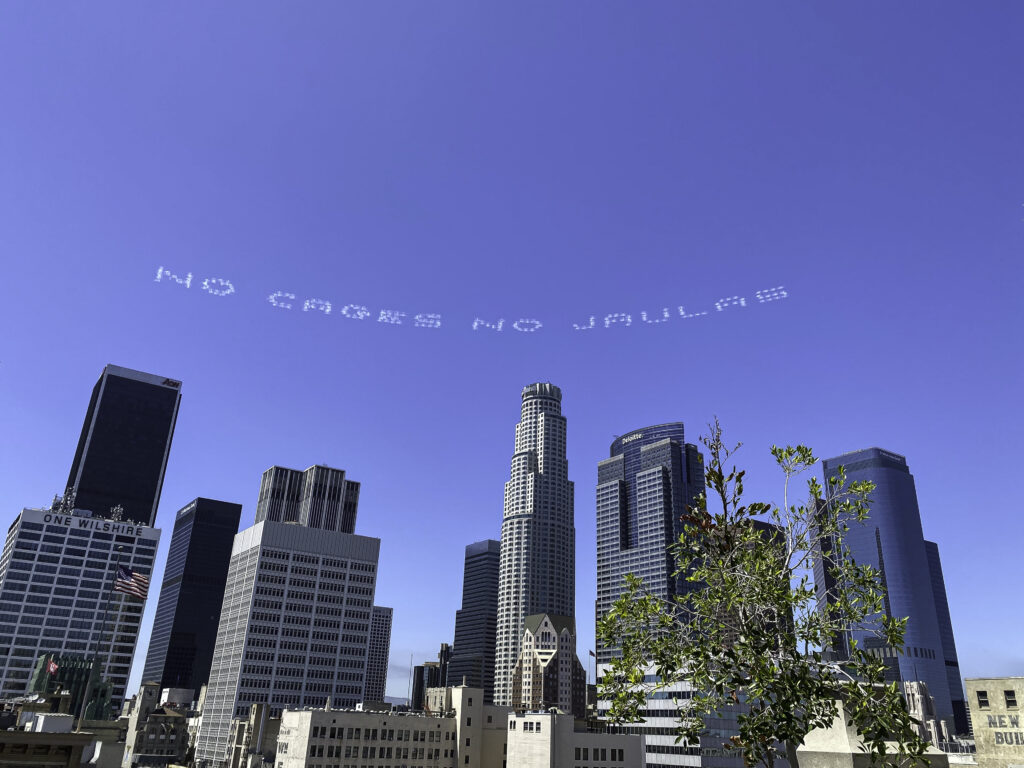 Credit: Dee Gonzalez/In Plain Sight"No Cages No Jaulas,” a message chosen by LA artist Beatriz Cortez, is skytyped over the immigration court on Olive Street in Los Angeles on July 3, 2020

The morning before July 4th, a group of artists and activists working together under the banner of the project “XMAP: In Plain Sight” sent flights throughout various parts of the United States to skytype messages in defense of immigrants incarcerated in detention facilities. These multicultural, multilingual messages — such as “Care Not Cages,” “Azadi” (“Freedom,” Urdu/Hindi)  “Lespwa Ak Libete” (“Hope and Freedom,” Haitian Creole)  “Mitakuye Oyasin” (“All Are Related,” Lakota) and “Nos Vemos Libres” (“We Will See Each Other Free,” Spanish) — conveyed hope, resistance, and solidarity. They also received significant attention from legacy media outlets like the New York Times, L.A. Times, and CNN—and on social media.

That same night, at Mount Rushmore (on stolen Lakota Sioux land), the president of the United States threw a populist pageant. Each detail of the event, from his nativist and racist speech to the grandiose setting, was designed to inflame his base’s desire to pull the country deeper into white nationalism and isolationism. While Native American activists protested outside the event, he ignored people lost to the raging coronavirus pandemic and those suffering under impending economic collapse, and explicitly denigrated people fighting for racial justice. The spectacle was aimed to bolster his failing popularity by stoking fears of a culture war created and driven by his own administration.

The two events were bipolar political spectacles. The Mount Rushmore event was fascist propaganda grounded in populism and nativism; XMAP:IPS was community-led mobilization grounded in culture and pluralism.

With just 89 days left before the presidential election, we need more of the latter.

The world is in a fragile state, as its peoples confront multiple catastrophes simultaneously— the coronavirus pandemic, mass political uprisings, forced displacement caused by climate change and war, and massive inequality. In the United States, these interlocking crises are exacerbated by a government fast descending into fascism, sacrificing lives for cheap political points as the GDP craters and millions hover near poverty.

Past administrations weakened the immigration system, the issue XMAP:IPS addresses. But the Trump administration, with its short-sighted and cruel policies, has caused it to degrade almost completely into brutality. As of May 2020 there are over 25,000 immigrants in detention, all denied protections against COVID-19. The current government has eroded protections for asylum seekers; it has also attempted to ban certain minority populations, roll back the protections offered to recipients of DACA (children of undocumented immigrants), and deport foreign students—all while continuing to threaten immigrant families with forced separation of children from their parents.

And then there are persistent calls to build a wall: Trump’s “big, beautiful” wall, which serves as a billboard for the administration’s xenophobia.

And that’s the key. So much of what emanates from the White House is bluster and stunt. As election season heats up, the administration is ramping up the political theater. In the month since the July 4th weekend, he and his daughter Ivanka posed with cans of Goya beans to indicate their support for the company’s CEO, whose controversial pro-Trump remarks led to calls from Latinos to boycott the company’s products. He held what could only be called a campaign rally in the Rose Garden, despite the long-observed norm by which incumbent presidents refrained from electioneering at the White House. Later the same week, there were pickup trucks on the South Lawn held up by a crane emblazoned with “Trump Administration.” Even his use of social media is a sort of ongoing digital spectacle. Trump’s recent tweets — which range from claiming the election should be postponed to attempting to ban Tiktok — fix the attention of the media, which chases them like a kitten with a ball of yarn and amplifies them in an endless cycle.

But just because these are stunts doesn’t mean they can be ignored. The administration is turning violations of basic rights into a series of antics to push the window of acceptability while manipulating our gaze away from the next violation. And as the tide appears to be turning, their tools against falling poll numbers will be voter suppression, attempts at election invalidation, and dialing up their culture war rhetoric. The stakes around the elections—which, despite the U.S.’s declining stature in the international arena, will be one of the most consequential global political events in recent history—couldn’t be higher.

We need to fight it all, in the courts, on our airwaves, in the press — and also in the streets and in the public imagination. For this last one, we need to mount spectacles of our own.

There is a long-standing tradition, domestically and internationally, of community-led cultural intervention — a “social relation amongst people, mediated by images”  — crafted in the language of aesthetic political resistance and radical community. It is an essential tool of nonviolent action. ACT UP, the grassroots movement to find a cure for AIDS, is particularly well known in the United States. More recent examples can be seen in South Korea, Armenia and Argentina, where culture-based demonstrations have been instrumental in pushing movements towards their goals.

I haven’t always supported political spectacle as practiced in the United States. Too often it is generated from outside an affected community, such as last decade’s Kony 2012. When imposed on a community’s needs and demands, grand gestures can be paternalistic, whitewashed, corporate stunts, such as Paving for Pizzas, or Refugee Nation, mounted by the same advertising firm that refused to stop working with Customs and Border Patrol, the US agency responsible for menacing immigrants. These types of actions suck time and energy away from the actual work that leads to positive social change. And as with the president, authoritarians and fascists have historically relied on it as a means of delineating and manifesting ideology and to distract a populace from larger social ills.

But when the purpose of political theater is to get people to engage with grassroots movements for change, it can be an effective tool for strengthening coalitions. When grounded in participatory democracy and cultural expression, the planning and implementation process of these events are an effective means of connecting people. This is what my team at XMAP:IPS had in mind when we created the strategy for our action in immigration.

We built the project predicated on three commitments: First, to amplify the voices of immigrants. Second, to be intersectional in the makeup of the production team and the invited contributors. Third, to partner with a network of national and local activists and organizations working directly with affected communities, and provide a new way for them to collaborate with each other. Highlighting their calls to action helped attract attention and resources for their work. This is how we captured the public square.

Ours was one of several interventions that captured media attention this summer. Black Lives Matter protesters have peacefully claimed the streets: they turned Brooklyn’s Barclays Center and 125th Street in Harlem into outdoor dance parties; in Washington, DC they created an outdoor yoga studio. In Minnesota an Aztec dance group paid tribute to George Floyd with performance, and a group in Atlanta honored John Lewis with dance. Artists turned slogans of resistance into public art. K-Pop stans — Korean pop music fans, many of whom have turned to activism — were joined by American TikTok teens in culture jamming the president’s June 20th Tulsa rally. In a signal they are watching and using the tools they have at their disposal to activate on current political events, they rapidly spread messages over social media channels to reserve seats in the stadium. The president’s campaign staff claimed a million people would attend. Instead, only 6,200 showed up. The president was despondent — and the culture jam achieved its goal.

Each of these actions is a statement. It is a reminder that none of this is okay — but that we might be able to come together to fight it.

In a time of fascism and propaganda, we need reason and action to be supported by grand visions of change.

These actions are fuel to our organizing power. They can be even more effective in firing up the collective imagination if they are connected, networked, and sustainably resourced. Driven by urgency and a political philosophy of interconnectedness, artists and activists too often fight without income or safety nets. Currently, legacy media outlets are giving far more coverage to the spectacle of the Trump administration and the GOP, than they are to the spectacles mounted by grassroots movements for social justice.

And yet, despite the lack of attention paid by the legacy media, those very movements — for Black Lives, for the climate, for the displaced and detained — are currently fighting to turn the public gaze to calls for justice. In the tradition of past cultural activations stretching from the March on Washington for Jobs and Freedom through to the establishment of Black Lives Matter Plaza in Washington DC and painting the sky with messages of solidarity, our movements are using culture and community to hold the public square.

We are at a critical moment in history. It requires us to continue using art as a foundation of social change and community building. We need support to allow people to stand up in a different way and create the space to do so, to use public dialogue to reignite compassion and build a collective vision for the country. Our interventions leading up to November can apply a different kind of pressure and allow us to dream beyond the election. Imagine the community engagement over the coming months if we were able to mount a coordinated series of local and national cultural activations.

With 89 days left until the election, we could lead the country through song, dance, art, and flight into a just future. Let’s give it to them. In the words of the late John Lewis, let’s find a way to get in the way. Let’s go big.

The stakes around the November elections—which, despite the U.S.’s declining stature in the international arena, will be one of the most consequential global political events in recent history—couldn’t be higher. 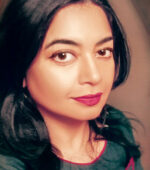 Lina Srivastava is the founder of the Center for Transformational Change, a global impact platform that cultivates the narrative power of communities to build just futures. She tweets @lksriv.

Lina Srivastava is the founder of the Center for Transformational Change, a global impact platform that cultivates the narrative power of communities to build just futures. She tweets @lksriv. 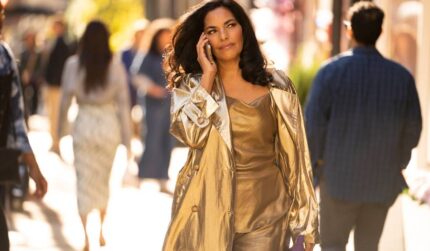