As their home country is engulfed by a raging second wave of the pandemic, Indians living abroad feel helpless and guilty. 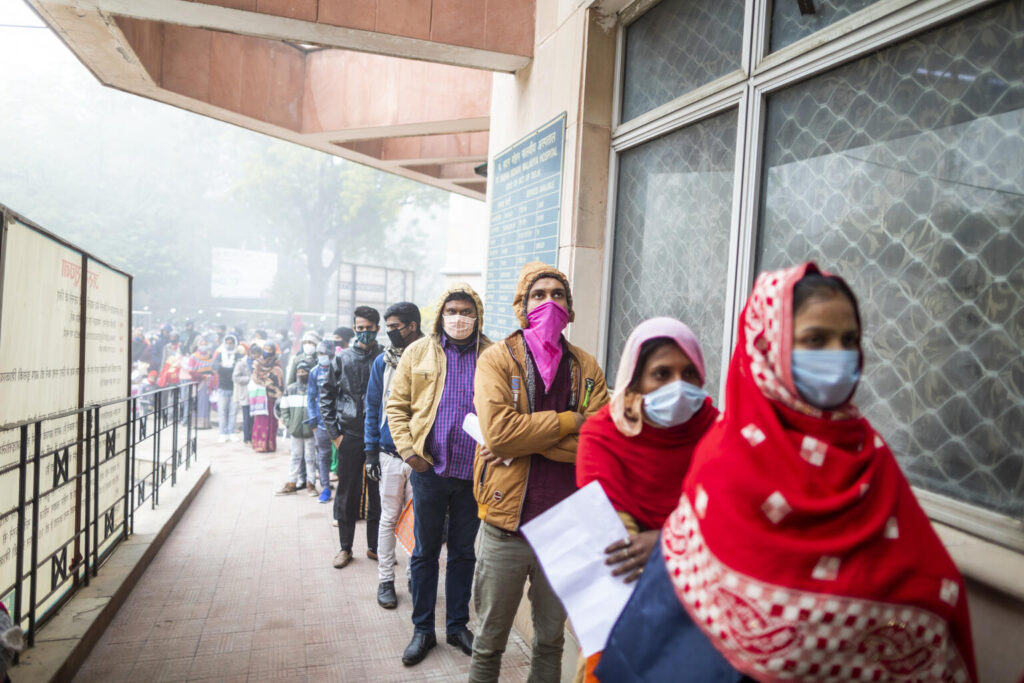 Credit: Sujay Reddy/UNICEFPeople queuing up in New Delhi to be vaccinated against COVID-19 on January 16, 2021. The government's rollout has stalled due to dwindling supplies.

The live-in domestic help at my parents’ house in Mumbai got COVID-19. My neighbor’s entire family was infected. So was my husband’s elderly aunt in Ahmedabad. My friend’s father was hospitalized for 12 days. Everyone in India knows someone who has been affected by the raging second wave of the pandemic.

And no wonder—as of today, India is the only country other than the U.S. to have 20 million coronavirus cases, and that is likely a vast undercount.

Crematoriums across India have so many bodies piling up that some are running out of wood to build funeral pyres. At Mumbai hospitals there are long waiting lists for beds; at one, the chief medical officer died of complications from COVID-19. She was 51 years old.

All over social media, people are posting their desperation, sharing shaky videos and pleading words, begging for a hospital bed, for oxygen, for someone to come and help. More than 100 Indian journalists have died of COVID, with one, Vinay Srivastava, live tweeting his declining oxygen levels until he died. Meanwhile, the Modi government ordered Facebook, Twitter, and Instagram to take down posts critical of its handling of the pandemic.

We hear about the tragic stories of the sick and dying in India’s cities, but almost nothing from the rural areas, where roughly two-thirds of the population lives.

Meanwhile New York City, where I live, is opening up. It’s been opening up. Indoor dining. Theaters. Gyms. Now the CDC says the vaccinated don’t need to wear masks outdoors. After a year of living in sweats, I went shopping for sundresses last week. Awkwardly, we hug each other again.

In New York City, a return to normal

On a warm Saturday in April, Mayor Bill DeBlasio made a surprise appearance at the Brooklyn Children’s Museum where we were celebrating Holi, the Indian festival of color, with live musicians, dancers, and samosas for guests to snack on.

During the last half hour of our time slot, which was limited to comply with COVID precautions, the mayor and a dhol player led a procession to the park next door. We played Holi, flinging colorful powder in the air and smearing each other’s clothes and hair with red, green, yellow, and pink, while catchy Bollywood songs playing in the background.

But even as I laughed and shrieked with friends, grateful that the receding threat of COVID had allowed me to enjoy my favorite festival, I celebrated with a clammy feeling of guilt. How could I turn my face to the sun while my country was being battered by a vicious second surge of the virus?

About 10 days before I celebrated Holi in Brooklyn, the Kumbh Mela took place in the northern Indian city of Haridwar. Government authorities estimate that approximately 3.5 million Hindu pilgrims traveled to the banks of the holy Ganga River for the days-long festival, despite a sharp increase in COVID cases in the country—and amid calls for the government to cancel the event.

But Narendra Modi, the Hindu nationalist prime minister, had already declared victory over the pandemic at the World Economic Forum’s Davos Dialogue in January. While the rest of the world warned that the number of cases was set to increase precipitously, Modi boasted that India had not only looked after its own population but was also saving lives by exporting 60 million doses of domestically produced vaccines around the world.

Even as the country was making global front-page headlines for its rising infection numbers, Modi and his home minister appeared without masks at massive political rallies leading up to state elections in West Bengal, where Modi expressed admiration for the size of the crowds. (The election results were announced Monday and Modi’s party, the BJP, suffered a major loss in the state.)

Last week, the Madras High Court handed down severe criticism of the Election Commission of India (ECI) for permitting political rallies during the pandemic. In response to a claim from a spokesperson for the ECI that COVID safety protocols had been enforced at the mass rallies, the chief justice asked, “Were you on another planet when political rallies were being held?” The justice underlined his outrage by adding that the ECI was “singularly responsible” for the massive second wave of COVID-19 in India, adding that commission officials “should be booked on murder charges” for sponsoring mass political rallies that turned into super spreader events.

At around the same time in Mumbai, the older sister of a close friend was running ragged trying to take care of her family. Her husband works at the airport and the docks, in “import-export.” His job is essential, since he oversees the import of critical supplies into the country, including oxygen, which is in desperately short supply. A colleague in the customs division has already succumbed to COVID-19. He himself is not fully vaccinated.

“He’s endangering himself every day, he has to travel for his job, and he can’t get the second dose, because they’ve run out,” my friend said.

My friend’s sister lives in a multi-generational home with her in-laws; recently, two of her in-laws’ cousins also came to stay with them. For a time, there were four elderly people at home, with 10 human beings squeezing into the three-bedroom apartment. Last week, one of the cousins, who was in her 80s, tested positive. One of my friend’s nieces has juvenile diabetes, which puts her at increased risk from the virus; her sister asked the elderly cousin to isolate at her own house. The woman died the next day.

Karna Basu’s maternal grandmother passed away before the second surge hit. His grandmother had COVID, but it was the cancer that took her life. The COVID made it hard for her to access treatment, though. They were close, and he regrets not being able to travel from New York, where he lives, to see her before she passed.

The news from his wife’s family is worse. For the last several weeks, the WhatsApp group of her extended family in Ahmedabad, Gujarat, has been bringing news of two new deaths from the virus each week.

“The family is getting depleted,” Basu says. “It’s so painful you don’t even want to think about it.”

An old classmate of mine in Mumbai is on a WhatsApp group full of wealthy professionals—the kind of people who, in India’s deeply unequal society, usually know someone in authority and thus are able to jump the queue. But even they are having trouble accessing resources.

“I’m reading their messages of desperation—they’re not able to get their hands on medicine and oxygen,” my classmate told me over the phone. “If they can’t do it, what is happening to the middle class and lower middle class in the country?”

When she had to get a hospital bed for her cousin, who tested positive a week before the state of Maharashtra went into lockdown, my friend realized just how dire the situation had become.

“We were hearing that there were no beds available, but only when I started calling hospitals did I realize how bad it was,” she said. The only reason they were able to secure a bed, she added, was because they knew someone high up in a hospital.

Even before the world had heard of COVID-19, India ranked 155 out of 167 countries in hospital bed capacity.

A New York friend spent a recent morning trying to find either medical oxygen or an oxygen concentrator, a device that take in ambient air and increases its oxygen concentration by stripping away the nitrogen, for a former employee of his in Delhi. He made 23 calls, only to be put on waitlist after waitlist. Eventually the employee found a hospital bed; she is now on a ventilator.

Aid is now coming into India now from several countries, including the United States, but President Joe Biden has been criticized for hoarding vaccines, while other wealthy countries continue to store vaccines in excess of their needs. In India, meanwhile, many states have run out.

My New York friend is angry at Modi’s government for not doing enough. “It’s all fucked up,” he says. “Not stockpiling enough vaccines is fucked up. Not having more structured lockdowns is fucked up. Silencing anyone who says anything bad about them is fucked up.”

Last year, the central government tried to force independent news outlets to submit their pandemic coverage to authorities for approval before publication. Just last month Yogi Adityanath, the chief minister of Uttar Pradesh and a key Modi ally, directed police to confiscate the property of anyone who posted about oxygen shortages online.

Meanwhile an increasing number of countries have limited or suspended travel from India, with Australia even criminalizing its own citizens for returning home from the subcontinent. Indians who live abroad can’t go back to be with loved ones during their last days or mourn with their families.

Ann, an American woman married a South Indian man, is now barred from traveling to northern India to finalize the adoption of a teenage girl. This would have been the family’s second adoption, and fourth child. Meanwhile, the young girl they were supposed to bring back to Texas this month is having a hard time in her orphanage. She’s the oldest one there, close to aging out of care. Every time they speak on the phone, Ann says, the girl is either crying or holding back tears.

“The only thing I have to say to you is come get me,” she says on their weekly calls. “When are you coming?”

Sending money is the only thing you can do

On the WhatsApp groups that I’m a part of, we exchange the names of aid organizations on the ground. “Is it vetted?” people ask. “Can you send me a list of reputable groups?”

When you’re 9,000 miles away, sending money is about the only thing you can do.

Meanwhile, I got my second dose of the vaccine last week. In New York, the tulips are blooming. Over the weekend, I met friends for an outdoor lunch and then enjoyed the sun on my shoulders at a nearby park. Around us picnickers spread out on blankets; a guitarist riffed nearby. I felt the grass brushing my bare legs and played mock battles with my son. The shoulder where I got the jab was still sore, and I was glad for the pain.

Here is a list of 12 places you can donate to help India.

In one extended family's WhatsApp group, two new deaths are reported each week. “It’s so painful you don’t even want to think about it.” 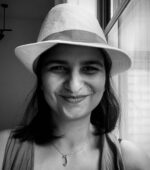 Jayati Vora was born and raised in Mumbai. She has been a journalist since 2003, writing for a men's monthly feature magazine and editing the theater section of TimeOut Mumbai. Since moving to New York in 2005 she has worked at The Nation Institute, Al Jazeera America, and Type Investigations. She has edited stories that went on to win major awards, including a Sidney and an Emmy. She now teaches entrepreneurs how to write compelling copy and hosts a writing-centric podcast called Cutting Chai Stories. Follow her on Instagram @jayativora.

Jayati Vora was born and raised in Mumbai. She has been a journalist since 2003, writing for a men's monthly feature magazine and editing the theater section of TimeOut Mumbai. Since moving to New York in 2005 she has worked at The Nation Institute, Al Jazeera America, and Type Investigations. She has edited stories that went on to win major awards, including a Sidney and an Emmy. She now teaches entrepreneurs how to write compelling copy and hosts a writing-centric podcast called Cutting Chai Stories. Follow her on Instagram @jayativora.