I thought I was doing the right thing, I was obeying orders, and now, of course, I see that it was unnecessary and wrong. But I don’t know what you mean by being upset….I didn’t personally murder anybody. I was just the director of the extermination program at Auschwitz. 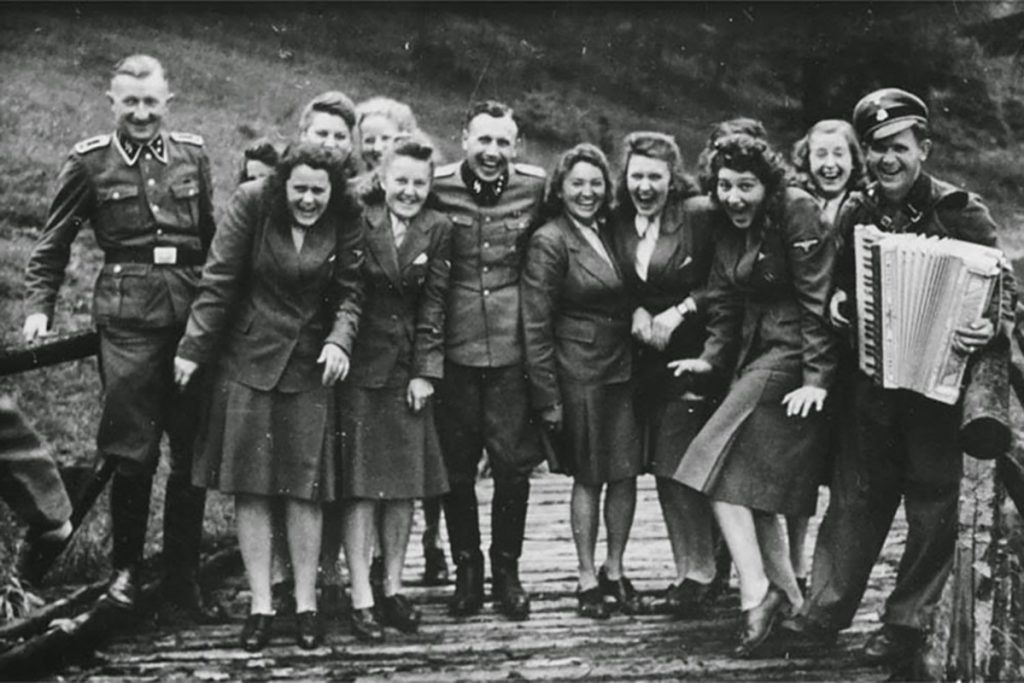 Several years ago I began researching Nazi mens rea, the legal term for a criminal defendant’s mental state at the time a crime is committed, in order to explore what it means to obey unethical orders. How do evil people convince others to do their dirty work? What effect do hateful ideologies and propaganda have on individual agency? Can complicity in crimes against humanity be explained by obedience to hierarchies or coercion?

How does one rationalize or compartmentalize genocide? Towards that end, I compared a Jewish-American Army psychiatrist’s interviews with defendants during the Nuremberg Trials in 1946 to Hannah Arendt’s reporting for The New Yorker on Adolf Eichmann’s kidnapping from Argentina and subsequent trial in Israel in 1961, Eichmann in Jerusalem. You could call it an examination of the banality of evil, the concept Arendt coined while watching Eichmann testify. The project was fascinating, but also sickening and mentally and physically exhausting.

I discovered that any attempt to pin down the origin and nature of atrocities foundered when shifting from systemic failures onto issues of individual moral culpability.

This was especially true when dealing with the testimony of perpetrators. The result was a paradox, described by Emil Fackenheim as the “double move”: to seek an explanation but also to resist explanation.

The Nuremberg Trials disturbed observers not simply with revelations of mass atrocities, but also by the Nazis’ seeming normalcy and lack of remorse. Dr. Leon Goldensohn spent seven months studying the mental health of the Nuremberg defendants on assignment from the U.S. Army. Goldensohn regularly interviewed both defendants and witnesses, 33 in total. His notes were published in The Nuremberg Interviews: An American Psychiatrist’s Conversations with the Defendants and Witnesses.

Goldensohn, himself a Jew, treated the defendants as subjects in a study, hoping for signs of a distinctive Nazi pathology. He didn’t find one. There were common patterns of behavior and repetitive answers, but from Goldensohn’s notes it’s clear that each Nazi made their own impression on the doctor. Defendants for the most part used their time with him to rehearse their testimony.

The basic measure for competence to stand trial at Nuremberg was the ability to tell right from wrong (historically, competence was also measured by an awareness of one’s actions). The tribunal’s authority rested on the notion that individuals act of their own free will and that those who cannot tell right from wrong belong in an insane asylum, not prison.

Of all the defendants, only two were deemed incompetent to stand trial. As for the others, Goldensohn held that psychopathy or sadistic tendencies didn’t necessarily negate one’s ability to distinguish right from wrong. The most repulsive interviews were with Julius Streicher, editor of Der Sturmer, the Nazi tabloid. While calling himself a Zionist, Streicher was the only defendant wholly unable to contain his anti-Semitic tirades. As Goldensohn put it: “He is of below-average intelligence, but all the same awoke one morning inspired to dedicate himself to becoming an ‘authority on anti-Semitism.’”

In order to get a conviction for each crime, prosecutors at Nuremberg not only had to prove that the Nazis committed the acts, actus reus, but also that they had the requisite mental state or intent when they did. Murder committed intentionally is punished more harshly than a murder committed in the heat of passion.

Since it was impossible to read their minds, this introduced an element of conjecture to the trials. How deliberate was the Final Solution? Who knew when and how far back did the plan go? Hitler was dead, so who was responsible? Why would anyone tell the truth?

The court drama played out over the original charge of conspiracy. Some scholars argue that the prosecution’s wish to prove that the defendants had all collaborated together in an organized conspiracy towards the Final Solution led them to exaggerate the intentionality and coherence of Nazi planning and policy. At trial, defense counsels were quick to point out the enormous confusion of authority in the Third Reich. In the hopes of having the conspiracy charges dismissed, Nazi defendants pled ignorance of the atrocities, blaming the compartmentalized system of Nazi administration.

There is evidence from Goldensohn’s interviews that even during the trial, Hermann Goering, the highest ranking Nazi defendant, was maintaining party discipline in prison. Goering’s plan for the defense was copied by the majority of defendants and involved ignoring the atrocities, or in the alternative, blaming Goebbels and Himmler, both conveniently dead. He disparaged lower-level officials’ claims when they contradicted his own, and proudly took responsibility for all but the extermination camps. No one living would account for those.

We Germans consider an oath of fealty more important than anything….Mind you, I said almost anything. I don’t consider the extermination of women and children as proper even if an oath were taken. I myself can hardly believe that women and children were exterminated. It must have been that criminal Goebbels, or Himmler, who influenced Hitler to do such a dastardly thing.

The disconnect between language and reality was astounding. By Nazi reasoning, Goering’s stolen art was a major disgrace, whereas killing Jews was merely distasteful. In an interview with Otto Ohlendorf, commander of Einsatzgruppe D, one of the paramilitary death squads, Goldensohn couldn’t hide his disgust.

LG: Did your wife know of this business of the Einzatsgruppe?

OO: I saw her, but never talked to her about those things. I didn’t think it was good conversation for a woman.

OO: In the first place, I didn’t shoot women. I merely supervised.

Hans Fritzsche, one of the few defendants to be released, was the head of the Radio Division in Goebbel’s Ministry of Propaganda from 1942 onwards. His defense:

Pure idealism on my part. I can defend everything point by point. But I won’t try to do that, because everything I did, I did before the world public. On the other side of the picture is the fact that on the basis of my work, 5 million people were murdered and untold atrocities took place. It is purely a question of judgment as to whether a connection can be established clearly between these two things.

Fritzsche felt no personal responsibility for his actions spreading anti-Semitic propaganda. His idealism, aka his Hitler-worship, was to blame. It’s not that they hated Jews, you see. They were simply devoted to the Führer. The Führer made it legal to kill Jews; if it’s legal, it’s not murder.

The psychiatrists who examined Eichmann pronounced him normal, or as one psychiatrist said, “more normal, at any rate, than I am after having examined him.” Still, the disconnect between systemic crimes and personal culpability remained. By Eichmann’s reasoning, his fixation on the Jewish question was the result of idealism. He was quoted once saying “Had I been born Jewish, I’d have been the most fervent Zionist!” As Arendt explained: an idealist was not merely a man who believed in an idea.

An idealist lived for his idea…and was prepared to sacrifice for his idea everything and, especially, everybody.

Eichmann might have personal feelings on a subject but he would never permit them to interfere with his actions if they came into conflict with his idea. This blind fanaticism allowed for some form of conscience so long as it did not obstruct the Nazi in the execution of his duties. For Eichmann that meant planning the deportation of Europe’s Jewish population.

Hannah Arendt was furious that Eichmann, like the Nuremberg defendants before him, had distanced himself from his crimes through mental gymnastics. She cut to the chase, arguing that he was guilty of crimes against humanity because the subjective element, his mens rea, was objective by virtue of complete obedience to the Führerprinzip. Eichmann not only “obeyed orders, he obeyed the law.”

“Act in such a way that the Führer, if he knew your action, would approve it.”

Eichmann had abdicated his ability to think for himself, she said. In relinquishing himself to Hitler, Eichmann became strictly liable for the crimes he committed on Hitler’s behalf.

Strict liability in such cases resolved the issue of criminal intent and made it difficult for those who benefitted from the regime to then disavow it later, as “so-called inner emigrants.”

[Inner emigrants] were people who frequently had held positions, even high ones, in the Third Reich and who, after the end of the war, told themselves and the world at large that they had always been “inwardly opposed” to the regime. The question here is not whether or not they are telling the truth; the point is, rather, that no secret in the secret-ridden atmosphere of the Hitler regime was better kept than such “inward opposition.” As a rather well-known “inner emigrant,” who certainly believed in his own sincerity, once told me, they had to appear “outwardly” even more like Nazis than ordinary Nazis did, in order to keep their secret.

One such emigrant was Oswald Pohl, head of the SS Economic and Administrative Main Office, and witness at Nuremberg. In interviews, Goldensohn pushed back on Pohl’s answers:

Had he ever objected to the whole business?

OP: No. Nobody asked for my opinion. It would have done no good to protest anyway….I did not participate in the murder of the Jews.

I remarked that nevertheless, he did run all the concentration camps.

Yes, but the camps had nothing to do with it….Some of my present wife’s best friends were Jewish. That is proof enough of how I feel.

Such were the totalitarian perversions of the moral and legal order. How did such a distortion take place? It was a deadly mix of ideological fanaticism, authoritarian state structure, intellectual and linguistic conformity, a subjugation of conscience, and ultimately the ability to overcome an innate aversion to human suffering.

South African psychologist Pumla Gobodo-Madikizela conducted prison interviews with the infamous Apartheid death squad leader Eugene de Kock, serving consecutive life sentences and barred from amnesty under the Truth and Reconciliation Commission. de Kock was said to have repented and showed remorse, but in her book, A Human Being Died That Night, Gobodo-Madikizela writes that he exhibited outright similarities to the Nazis, particularly in his views on racism. Just like Eichmann and Streicher’s claims to Zionism, de Kock insisted that his zealously nationalist father equated Afrikaner nationalism with the ANC’s struggle for freedom, that his father could not possibly have been a racist because he spoke multiple African languages, and “had he been black, he would have joined the ANC.”

When we consider history, we see that such mental gymnastics are not coincidental. If they were unique to Nazis, the Klan would not be marching and lynching postcards would not exist. When Trump said he could shoot someone on 5th Avenue and his followers would support him, he was right. To paraphrase Nixon, “It’s not murder when the President does it.” Destroying society’s moral compass promotes the politics of hate from a practical perspective.

In light of this, we must continue to study the nature of genocide and mass atrocities, not in an attempt to find definitive answers, but rather to illuminate the boundaries of what’s knowable. Expanding our collective imagination of what’s humanly possible is crucial if we’re ever going to stop embracing old horrors with new technologies.